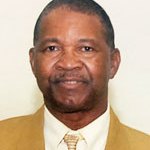 Robert worked at Newport News Shipyard and at Planters Peanuts in Suffolk for several years. He later worked at Union Camp Corporation in Franklin for many years where he retired in 2001. Robert was determined to stay busy after retirement, so he started working for Southampton County Schools transporting students safely to and from school.

Robert loved his sports and spent many years playing first base for the Holland Aces, the Carrsville Woodpeckers and Southampton Cardinals. He just loved the sport. He also played softball with the Franklin All-Stars. Robert coached girls’ softball and after playing baseball and softball for many years, he became an umpire for various leagues in the community. Robert was a huge fan of the Los Angeles Dodgers and the Dallas Cowboys.

Robert was preceded in death by his parents Robert Knight Sr. and Marie Jones Knigh, and his sister Essie K. Hatcher.

Although our hearts are heavy now, Robert was a light in this world and now we need to continue to shine his light by carrying it within us in our own lives. Join us for a celebration of his life on Saturday, Sept. 24, at 11 a.m. at First Baptist Church, 318 Hall Street, Franklin, Virginia, 23851. The Rev. Marcus Jennings, pastor and the Rev. Marilyn Lawrence, messenger. The viewing and family visitation will be held on Friday, Sept. 23 from 3 to 7 p.m. at William M. Johnson & Sons Funeral Home, 224 South Main Street, Franklin, Virginia 23851. CDC protocols will be followed. Masks are required at all services and temperatures will be checked upon entry.