SUFFOLK – Joyce Antnette Coggsdale Harrell, 90, of Holland Road, passed away Sept. 13 at home surrounded by her loving family. She was predeceased by her wonderful husband, Robert Lee Harrell Sr., as they were blessed to have been together for 56 years. 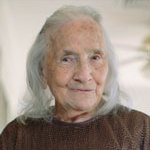 Born in Southampton County, she was the daughter of the late John Waverly Coggsdale Sr. and Bertha Harcum Coggsdale. She graduated from Newsoms High School. A house and farm wife, that loved working alongside Robert Lee and raising her family. There wasn’t a time when she wasn’t doing something for them. A good book or a game of Scrabble was a luxury.

She was a member of Bethlehem Christian Church, the director of Story Hour, on the Library Committee, and served on the Southern States Women’s Committee. She and her family were honored by the Suffolk Chamber of Commerce as Farm Family of the Year in 1999.

She was predeceased by her brothers, Freddie, Hubert and Shelton Coggsdale and brothers- and sisters-in-law, Julian and Gilmer (Rachel) Harrell.