Cyrus was a tailback for Southampton High School in Courtland and Virginia Tech in Blacksburg, Virginia. He holds the title of the all-time leading rusher in both schools. After his brief NFL career, Cyrus decided to move back closer to home to Alexandria, VA. This is where he landed his career job as a marketing sales rep, in 1988. In 1993, Cyrus met the love of his life, Bebeth Lawrence. 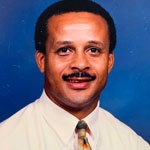 A viewing will take place on Friday, Sept. 16 at the Apostolic Faith Church of God General Assembly, 608 Oak Street in Franklin. A service will be held in the same location on Saturday, Sept. 17, at 11 a.m. His interment will be at Southampton Memorial Park in Franklin. Vaughan-Temple Funeral Home is in charge of the arrangements.