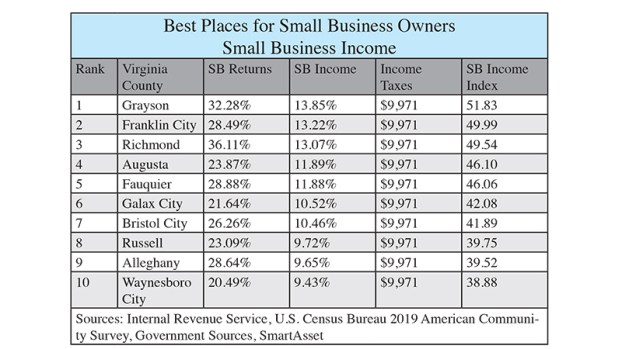 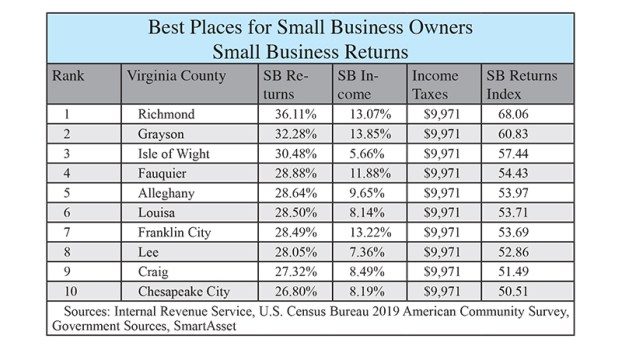 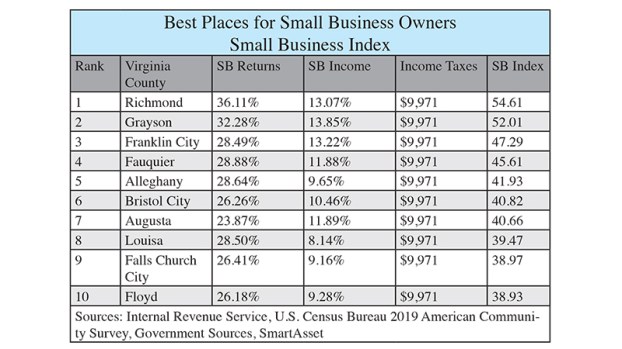 The city of Franklin and Isle of Wight County are two localities that are among the best places in the state for small business owners, according to an analysis done by SmartAsset.

As noted on its website, SmartAsset is an online destination for consumer-focused financial information and advice that powers SmartAdvisor, a national marketplace connecting consumers to financial advisors.

For Franklin, the analysis puts the city’s small business income at 13.22%, behind only Grayson County in Virginia with 13.85% at No. 1. Franklin’s No. 7-ranked small business returns in the state are listed at 28.49%.

In terms of the Small Business Index, which combines all of the factors of SmartAsset’s analysis, Franklin was ranked No. 3 in the state at 47.29.

“It shows a lot of the things that FSEDI and other people in the community have been doing,” he said.

Among the things FSEDI has done to make Franklin a more accommodating place for small businesses is administer the STARTUP Franklin Southampton Program.

An FSEDI news release noted that STARTUP Franklin Southampton is a grant program that helps entrepreneurs start businesses through business education, developing a business plan, presenting the plan through a pitch competition and awarding prize money to the top business plans. In its four rounds of competition thus far, STARTUP has awarded prize money to 10 businesses that are all still in operation.

STARTUP is a complement to another major FSEDI offering — the Franklin Business Center.

As noted on the FSEDI website, the center is a four-story, 40,000-square-foot, fully renovated and restored mixed-use incubator located in Historic Downtown Franklin at 601 N. Mechanic St. The building houses office space, support staff and programs that nurture young firms and expanding businesses, helping them get started by letting them first incubate in the supportive environment of the center for as many as seven years.

Heck noted that FSEDI works closely with the Hampton Roads Small Business Development Center, and he said that FSEDI Marketing and Existing Business Manager Ashley C. Covington is helping draw tourism to the city, connecting the tourists with small businesses.

“So it’s a culmination of a lot of the things that we’ve been doing for a while that shows up in a study like SmartAsset, which does these things from time to time,” Heck said.

He stated that Franklin has a fair number of the kinds of spaces that small businesses can locate in.

“It’s relatively affordable to have a business here, and you’re reasonably close to kind of bigger markets, so that kind of helps as well that they do have some companies that you can work off of not only in Franklin but in Southampton, Isle of Wight and Suffolk that are reasonably close,” Heck said. “Not all of our small businesses are retail. Some of them, like I said, they work with those larger businesses as well.”

SmartAsset shared the methodology for its analysis with its results, noting that to determine the best places for small business owners, “our study measured three factors: the proportion of people in a county with small business income, the reported business income and the amount of tax a potential resident must pay on their income.”

The methodology noted that small businesses are typically incorporated as pass-through entities, meaning that the business owners pay income taxes on the company profits rather than the company itself paying income tax. Because of this, income taxes can play a major role in determining the financial success of a small business. To determine income tax burdens across counties, SmartAsset used the national median household income and then applied relevant deductions and exemptions before calculating federal, state and local income taxes for each location.

“We are very pleased to see this data,” said Isle of Wight County Economic Development Director Christopher “Chris” A. Morello. “It indicates on the whole that small businesses are reporting strong earnings in Isle of Wight. Entrepreneurs living and working in the county and in our two towns, they know this is a wonderful place to live, and it stands to reason that they want to do both here.”

Morello indicated that he partially interpreted Isle of Wight’s high ranking in the Small Business Returns portion of SmartAsset’s analysis as “Welcome to the Gig Economy: Isle of Wight Edition.”

He noted that Isle of Wight has been tracking trends in business license issuances for a while.

“(In) our annual report, for example, we list the total number of new business licenses in the county,” he said. “We show that up against the prior year, and we also report business licenses in the county and in the town of Windsor and in the town of Smithfield on a monthly basis with our newsletter, so we have been watching these trends for some years.

But what the county has seen in the last two years has been especially positive, Morello noted.

He stated that Isle of Wight County has a lot of growth going on with its residential units and apartments and condominiums and other buildings, which includes out-of-town contractors who are issued business licenses to do their work.

“We haven’t teased out exactly what the statistics are, but some portion of that is temporary and out-of-town contractors,” he said. “I think if we tease them out, we’d still see very strong proportional year-over-year and year-to-date increases in business license issuances.”

“We don’t have perfect information about this, we’re trying to gain a greater understanding working with our towns and the county to derive this, but we know that the number of home-base operations far outnumbers the other, more traditional business locations in the county,” he said. “I think there’s a connection between that data and the SmartAsset analysis.”

As for what Isle of Wight, Windsor and Smithfield have done to make the county so appealing and beneficial for small business owners, Morello cited the governments’ willingness to help in times of significant need.

“The county and the towns have stepped up to help small businesses with grant programs through the pandemic,” he said. “It seems like we have a very strong entrepreneurial base here and a lot of entrepreneurial spirit from what we learned when we talked to the businesses directly. It’s great.”