FRANKLIN – Herbert “Herbie” Martin Lewis Jr., 83, passed away peacefully in his sleep on Sept. 2, 2022 at Southampton Memorial Hospital. Born in Greensboro, North Carolina and raised a proud Franklin resident, he was the son of the late Herbert M Lewis Sr. and Jesse Hurd 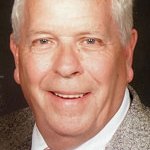 Lewis. He was predeceased by his beloved brother, Thomas H. Lewis and his only daughter, Anna Parker.

Herbie was a graduate of Franklin High School and attended Randolph-Macon College alongside his “little” brother. After college, he returned to Franklin where he met his wife of 60 years, Rita Lewis and was employed at Union Camp.

He will be remembered as the smart, kind and loving husband, father and doting grandfather that he was. Left to cherish his memory are his wife, Rita Lewis; his granddaughter, Paige Parker; his nephew, Harrison Lewis and his extended family in Georgia, Susan Vick Dunn (daughter of the late Connie Vick), her husband Chris Dunn and their daughter, Katie Dunn.

A memorial service will be held in Wright Funeral Home, Franklin on Thursday Sept. 8, at 11 a.m. with the Rev. Ned Alderman officiating. Memorial donations may be made to High Street United Methodist Church, 31164 Camp Parkway, Courtland, VA 23837.