WINSTON-SALEM, North Carolina – Dorothy Jenkinson Trotman passed away peacefully on Aug. 29, 2022 at her residence at Salemtowne Retirement Community surrounded by family and friends. Dottie had been a resident of Salemtowne for the last few years where she made many friends and renewed many old acquaintances.

Dottie was born in Karnes County, Texas on Dec. 26, 1921 to Stanley and Sally Ann Lee Jenkinson. She received her nursing degree from Santa Rosa School of Nursing in 1943. Shortly after she joined the Army and served until the end of World War II. While stationed at Camp Wolters, Texas she met and married John F. Trotman. After the war they moved back to Winston-Salem and made their home there. They raised two da 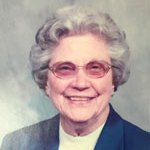 ughters, Dorothy “Bambi” Councill (Jim) and Lee Trotman. Dottie and Frank were married for more than 50 years. Dottie was very involved in her community and loved to travel. One of her last trips was to see the tulips in Holland when she was 93. Dottie had five grandchildren, 18 great-grandchildren and two great-great grandchildren. Dottie celebrated her 100th birthday at Christmas this year with many friends and family in attendance. The family wishes to thank Dottie’s many friends, the staff at Salemtowne and Trellis and her caregivers for making this a true celebration of a wonderful life.

There will be a memorial service at Salemtowne in the Saal on Sept. 2, at 11 a.m. There will be visitation prior to the service at 10 a.m. In lieu of flowers, contributions may be made to the charity of the donors choice.

Interment will be private.