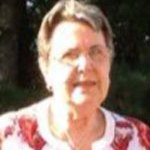 Patricia served in the U.S. Army from 1958 to 1960 and was a retired loan officer for the U.S. Department of Agriculture.

She enjoyed dancing and shagging with the Franklin Shag Club.

A gathering of family and friends will be held from 6 – 8 p.m. on Saturday, Sept. 3 in Wright Funeral Home, 206 W. 4th Ave., Franklin, VA. In lieu of flowers, memorial donations may be made to the SPCA or your local animal shelter.