SUFFOLK – Robert “Monty” McRae Montgomery III, 68, passed away at Sentara Norfolk General Hospital with his wife by his side on Aug. 10, 2022. Monty was born in Victoria, Virginia and was the son of the late Robert Mcrae Montgomery Jr. and June Gee Montgomery. 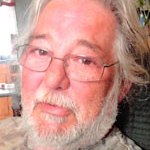 Monty was a former resident of Newport News and a graduate of Frederick Military Academy. He was a retired railroad engineer for Norfolk Southern Railroad. Monty could do anything. He was a fisherman, welder, carpenter, accomplished drummer and animal lover. Monty loved people and was a loving father and friend.

A memorial service will be held at 2 p.m. on Saturday, Aug. 20 in Wright Funeral Home in Franklin with the Rev. James Lewis officiating. Memorial donations may be made to Autism Society, https://autismsociety.org/, 6110 Executive Boulevard Suite 305, Rockville, Maryland 20852.