THOMASVILLE, North Carolina – David Francis Clark, son of the late Francis Eastman Clark and the late Patricia Slosson Clark, died of natural causes Sunday morning July 24, 2022 in his home in Thomasville, North Carolina. David is survived by his brother, Frederick (Rick) Clark of Dayton, Wyoming. He had one niece, Kia Clark Trout and two nephews, David A. Clark and Chance F. Clark. He had several cousins including Caroline Crease. 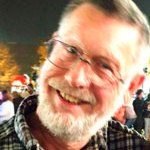 David was born May 9, 1955 in Franklin, where he graduated from Franklin High School and briefly attended Virginia Tech. At the age of five, David demonstrated his love of water and was well known on Sycamore Road where he was often seen turning on water spigots. He later spent many days playing in nearby creeks and ponds and eventually water skiing and fishing with family and friends on the Nottoway. He loved Nags Head and Hatteras and Ocracoke Island where he spent many days with his family trolling for blue fish, Spanish mackerel, dolphin (the fish) or bottom fishing for flounder in Oregon Inlet or crabbing in Albemarle Sound. David also loved dirt biking almost as much as he enjoyed repairing and modifying his dirt bike and he could fix most anything of a mechanical or electrical nature.

In high school, he worked summers for the late Charlie Lupton, who taught him the basics of the electrical trade. After high school, David traveled west and spent several years with his brother and family. He was affectionately known as “Uncle Daydee” by his niece and nephews and often showed up at Christmas in his Ford Pinto packed with Christmas gifts for them. He also worked as an electrician in Alaska; and, at one point, he rode a bicycle cross country with a friend. They started in California, rode up into Washington State and then across Canada and down to Boston. Upon returning to Wyoming, he worked putting in a new alarm system at the V.A. in Sheridan and lived in Buffalo, Wyoming where he was employed at a uranium mine east of Kaycee in the late 70’s. He helped his brother build a log home in Dayton, Wyoming. After a trip back east, David loaded up his gear in 1984 and was headed back to Wyoming when his truck broke down outside High Point, North Carolina and he has resided in Davidson County thereafter.

David then earned his electrical contractors license and started C&O Electrical Contractors Inc. in Thomasville, North Carolina and later became sole proprietor. He was a very assertive and determined individual and always found a way to “get ‘er done.” He was highly skilled as an electrician, as a contractor and as a small businessman. His work became the main focus of his life and he was very dedicated to that work, his company, his clients and his employees including Tina Stephenson (his bookkeeper and earthly guardian angel) and a very loyal Juan Ramirez. David was widely respected among building professionals wherever he worked. David was also widely known for making people laugh with his wit, stories or jokes. As an individual or as a contractor, as a family member or as a friend, there are not enough words to express how much David F. Clark will be missed.

In lieu of flowers, contributions may be made to the Friends In Need Animal Rescue, 350 Pickard Road, Thomasville, North Carolina 27360 and/or the Ruth Campbell Memorial Branch Library, 280 North College Drive, Franklin, Virginia 23851.

A celebration of life or a service will be announced at a later time. David will rest with his mother and father at Poplar Springs Cemetery in Franklin.