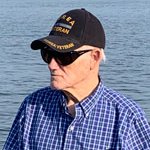 Raymond was an electrician at Union Camp for 43 years. He enjoyed his work there as well as his woodworking hobbies. Each family member and many others were recipient of his woodwork. He was a member of Beaver Dam Baptist Church and enjoyed participating in mission trips to Eastern Shore. He was a proud Korean War Army Veteran.

A memorial service will be held at 3:00p.m. Saturday, July 30th at Beaver Dam Baptist Church. There will be visitation after the service. In lieu of flowers, donations may be made to the church or to your favorite charity.