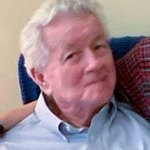 Nick was a veteran of the Vietnam War. He served in the Air Force for four years with top secret clearance, spending 15 months in Okinawa.

To the community, he was known through NAPA. He was associated with the company for 55 years and has owned Nicholson Auto Parts for 24 years in Courtland.

Nick loved piddling outside and classic cars. He was an avid participant in classic car shows and his signature blue Chevy pickup truck is painted into a mural in downtown Franklin.

A funeral will be held at 2 p.m. on Wednesday, July 20 in Capron United Methodist Church with Pastor Fred Brockhausen officiating. Burial with military honors will follow at the Capron Cemetery. The family will receive friends Tuesday from 6 – 8 p.m. in Wright Funeral Home in Franklin and suggests in lieu of flowers, memorial donations may be made to Capron United Methodist Church, P.O. Box 159, Capron, VA 23829.