FRANKLIN – James Lee “Jimmy” Duke was born on March 10, 1947 in Colosse, on the snowiest day of the year and on July 10, 2022, he went home to heaven to be with the Lord peacefully in his sleep with his loving wife, Gale Burgess Duke by his side. Jimmy was 75 years old at the time of his passing. 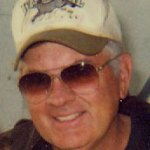 Jimmy was a hard worker and from an early age was trusted to get the job done. As a young man, he worked on the construction of Highway 64 in the Hampton Roads area before being hired on at Union Camp, which later became International Paper. He worked there for 33 years and after ten years became a foreman on the woodyard where he remained until becoming a supervisor in maintenance the last few years he was employed there before retiring. Jimmy gave his all to what he did and took pride in the labor of his hands and what he achieved. Through his example, he passed on a strong work ethic to his children and grandchildren.

After Jimmy’s father passed, Jimmy and his siblings inherited Duke’s Mobile Home Park, as well as the large parcels of land attached to it. Jimmy took ownership of the mobile park and was owner and manager of it until his health no longer allowed.

Jimmy loved the outdoors. Whether hunting, fishing, target shooting or performing upkeep on the mobile park and surrounding land, he enjoyed being out and about and staying busy for as long as his health allowed. He also enjoyed spending time talking with multiple friends who ran different shops and markets in the area.

Aside from his wife, the love of Jimmy’s life was his grandchildren. All of them are grown now, but Jimmy stayed in close contact with each of them and they also reached out to him regularly, maintaining a strong bond.

Gale Duke would like to express special thanks to the following people: her daughter, Lisa (an LPN) for all her help and advice; Danny and her grandchildren, Josh and Lucas, whose constant help was an invaluable blessing; Jeannie and Bobby for their help and friendship throughout; and the home health nurses and hospice workers who took wonderful care of Jimmy and ensured his physical comfort until he passed in peace.

A funeral service will be held at 2 p.m. on Thursday, July 14, 2022 in Wright Funeral Home in Franklin with pastors David and Danny Dillon officiating. Burial will follow in Southampton Memorial Park. In lieu of flowers, donations to the Boys Town is recommended.