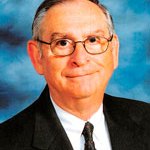 Bill was a graduate of Grundy High School, attended the University of Virginia, Milligan College and graduated from Emory and Henry College with advanced degrees from the College of William and Mary.

Bill was a long-time member of Courtland United Methodist Church where he taught the adult bible class. He was a founder and first president of Courtland Volunteer Rescue Squad, served on the Courtland Town Council for 21 years and vice-mayor for 20 years. Bill served as president of the Southampton-Sussex Youth Baseball League from inception until 1990. The Courtland Ruritan Club had him as a president or officer for most of his 54 years of membership.

He is survived by his life partner, Deborah Roselius; his son, Ricky; daughter, Katherine Coley (Chris) of San Antonio, Texas; and four grandchildren, Mason and Madison Wright and Caroline and Matthew Coley. He will be sadly missed by Deborah’s children, Leslie Puckett and Robert Puckett and their children, Eric Applegate, Lola, Lucia and Sunny Puckett.