BUFORD, Georgia – Mr. Curtis “Buz” Hughs Jr., 75, passed away on Tuesday, June 2 in Pruitt Health Lanier Nursing Home in Buford, Georgia. He had been suffering from a stroke and blood disorder. A memorial service was held at his sister’s home at 761 Moss Side Drive in Bethlehem, Georgia. 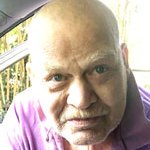 Curtis is the son of the late Curtis Hughs Lumpkin Sr. of Athens, Georgia and Ann Elizabeth Redford Lawson of Richmond, Virginia. His late stepfather, Hugh Jack Lawson was from Franklin. He and Jack both worked at Union Camp in Franklin.

He is survived by his sister, Carolyn Lumpkin Brown, nephew, Jason Michael Brown, of Bethlehem, Georgia and half-siblings, James Christopher Lumpkin, Kathy Lumpkin Butler of Athens, Georgia and Denise Lumpkin Burn. Curtis was a retired Fisher Scientic Logistics. He graduated from Franklin High School and attended Old Dominion University in Norfolk and attended the University of Georgia. Curtis was an advert runner and bicyclist in his youth. Curtis “Buz” Lumpkin served in the Vietnam War as a dental technician and was a true lover of cats and University of Georgia football.