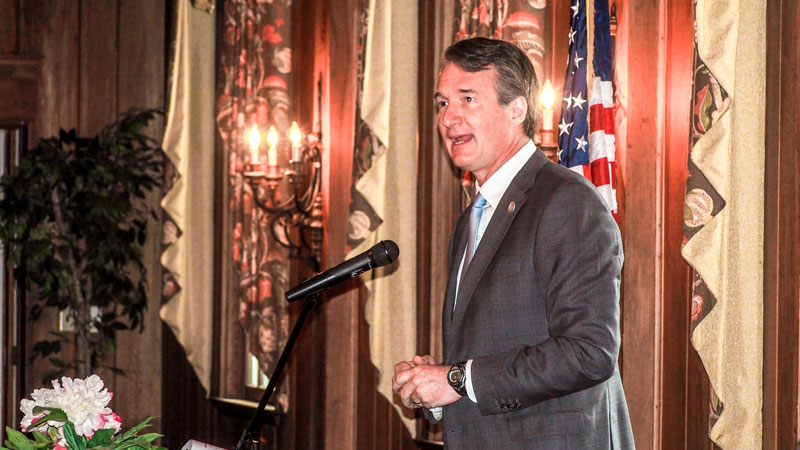 Gov. Glenn Youngkin addressed local government officials and businesspeople from Franklin and Southampton County at a "Breakfast with The Governor" event by the Franklin-Southampton Area Chamber of Commerce, held at the Cypress Cove Country Club. Stephen Faleski | The Tidewater News

Gov. Glenn Youngkin highlighted his plans for agriculture and education at the Franklin-Southampton Area Chamber of Commerce’s “Breakfast with The Governor” event, held at the Cypress Cove Country Club in Southampton County the morning of June 9.

The state budget includes $100 million for the creation of K-12 “lab schools” that would offer workforce-tailored curriculum in a variety of industries.

His preferred solution — the creation of K-12 “lab schools” that would offer workforce-tailored curriculum in a variety of industries, including agriculture — is earmarked to receive $100 million in Virginia’s budget, even though a bill to create such schools ended up stalling in the General Assembly. The budget is now on its way to Youngkin’s desk after months of negotiations between the Democratic-controlled state Senate and the Republican-controlled House of Delegates.

Senate Bill 656, which Youngkin signed into law in April, requires school boards to adopt Virginia Department of Education model policies no later than Jan. 1, 2023, to permit parents to review any instructional material that includes “sexually explicit content” and provide an alternative assignment at parents’ request. The push for greater parental oversight of school reading assignments has played out in neighboring Isle of Wight County, whose School Board has received backlash since last fall over Smithfield High School’s “Read Woke” challenge.

The voluntary challenge encourages students to read social justice-themed books from a list of 70 titles available at the school’s library. Some parents have objected to the profanity and sexual content in some of the selections, while others have argued the books’ focus on race relations is divisive.

Youngkin then turned to wait times at Virginia’s Department of Motor Vehicles service centers, which he said stood at an average of 35 minutes in January “just to see somebody to get started.”

When a DMV office in Portsmouth found itself consistently in the red week after week, Virginia Secretary of Transportation Sheppard “Shep” Miller III one day decided to pay the center an undercover visit and found himself waiting over an hour before pulling out his business card and revealing his identity.