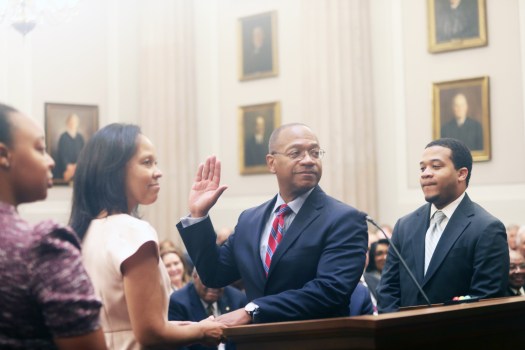 Chief Justice S. Bernard Goodwyn, center, holds his right hand up as his left hand is on the Bible held by his wife, Sharon S. Goodwyn, as his daughter Sarah E. Goodwyn, left, looks on along with his son Samuel J. Goodwyn during the Administration of Oath Wednesday, June 8, 2022 in the chambers of the Supreme Court of Virginia. Regina H. Boone/ Richmond Free Press 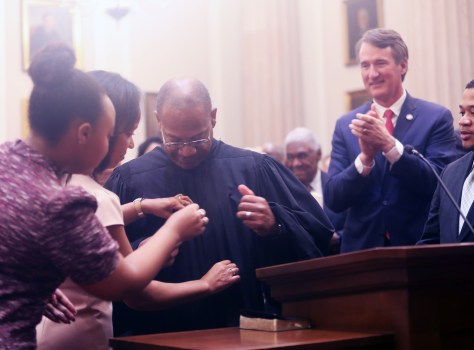 As Gov. Glenn A. Youngkin claps and looks on, S. Bernard Goodwyn is assisted by his daughter Sarah E. Goodwyn, left , and his wife, Sharon S. Goodwyn, with his robe, following the Administration of Oath Wednesday, June 8, 2022 in the chambers of the Supreme Court of Virginia. His son Samuel J. Goodwyn, right looks on. Regina H.Boone/Richmond Free Press 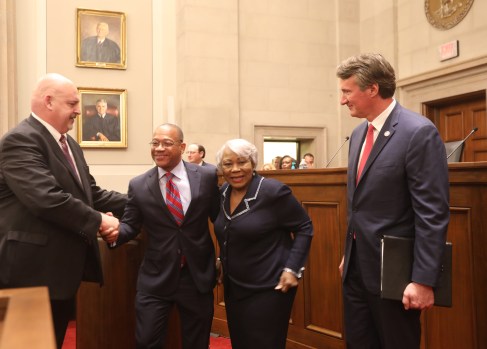 RICHMOND – The courthouse shook from the cheers at the investiture congratulating the new chief justice of the Supreme Court of Virginia.

Family, friends and citizens of the commonwealth filled the pews quickly, sitting shoulder to shoulder.

Phillip Buchanan and his wife drove from North Carolina to attend the ceremony. The couple has been to many of Goodwyn’s investiture ceremonies.

Buchanan and Goodwyn have been acquainted since the 1980s. Goodwyn has always been the same person he is today, Buchanan said. He believes Goodwyn will bring reason and well thought out opinions as the new chief justice.

“I think he’ll be a justice for all the people,” Buchanan said.

Remarks were given by Gov. Glenn Youngkin, Speaker of the House Todd Gilbert and Goodwyn himself. Each speaker spoke highly of the new chief justice and his accomplishments throughout his career. They congratulated him and sent well wishes on his new journey.

Sharon Goodwyn held the Bible as Justice Cleo E. Powell swore in her husband. His children, Sarah and Samuel, stood with him.

Eileen A. Olds is a retired judge from Chesapeake. She and Goodwyn both began their judicial careers weeks apart, she said.

“I have no doubt that the new chief justice at the helm of the Virginia court system is in excellent hands,” Olds said.

She described the ceremony as monumental and expressed her excitement for the new chief justice. She believes Goodwyn is of upstanding legal and moral character.

Goodwyn was appointed to the state Supreme Court by Gov. Tim Kaine in 2007. He was unanimously elected by the General Assembly to the Supreme Court in 2008 and was reelected in 2020.

Donald W. Lemons served as chief justice for seven years preceding Goodwyn. His current term was set to expire in 2024.

The Virginia Supreme Court is made up of seven justices, each elected by a majority vote of the General Assembly in both houses for a term of 12 years, according to Virginia Courts. The chief justice is chosen by a vote of the seven justices for a term of four years. There is no required limit to the number of four-year terms a chief justice may be elected, but the court has said the justices internally adopted a two-term limit.

Former law clerks of Goodwyn were moved by the ceremony. They described Goodwyn as dedicated and a man with a heart of service.

“No doubt he will excel in this role,” said Cara Cotter, Goodwyn’s former law clerk.