She was the daughter of late Willie Burse Ellis and Sarah Elizabeth Ellis and was preceded in death by her husband of 61 years, Jesse Lineberry Grissom, her sister Bernice E. Fisher and grandson, Jeremy Lee. 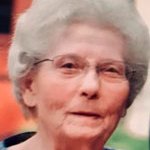 Margaret was a graduate of Courtland High School. She was a librarian and bookmobile driver with Walter Cecil Rawls library for 26 years and previously worked at Edwards Hardware, a hairdresser at her father’s barbershop and served as a secretary for several years at Portsmouth Naval Shipyard.

Over her lifetime she served in many capacities as a member of Courtland Baptist Church.

Margaret had a joyful spirit, a contagious laugh and deep concern for others. She enjoyed the many visits, phone calls and cards from her family and friends as well as the activities during her residence at the Village at Woods Edge.

Funeral arrangements will be entrusted to Wright Funeral Home.