NEWSOMS – Glenn Hartwell Updike Sr., age 82, joined his Heavenly Father on May 28, 2022 after a short illness. 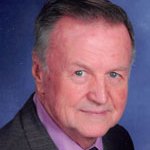 He is survived by his wife of 54 years and best friend, Lynda Thorpe Updike and his children, Lee John Updike of Texas, Kelley L. Updike (Rick) of Florida and Jennifer U. Cuthbertson (Anthony) of Statesville. Beloved apples of his eye are grandchildren, M. Hart and Sawyer Updike and David, Emily and Jenna Cuthbertson. Also surviving are brothers, Randall (Toni), Lyle (Joan deceased) and Francis (Susan) and numerous nieces and nephews. He was the son of the late John and Clara Updike of Washington, Virginia. He was predeceased by his brother Kelley, son Glenn Hartwell Jr., and nephew, Justin Updike.

He graduated from Virginia Tech and earned a masters from Virginia State. He served his country in the National Guard. He worked for Virginia Extension Service for many years while farming the family farm.

He was a longtime member of Barnes Methodist Church where he served as Sunday School Secretary and Newsoms Ruritan Club where his handle was “cow whisperer.” His entire life was dedicated to recruiting kids for 4-H, helping them with livestock projects and teaching life lessons along the way. He helped organize the Emporia 4-H Livestock Show. He was the neighborhood go-to for livestock issues. He served on the Southampton Board of Supervisors and continued to advocate for issues he felt passionate about, especially issues involving children.

Visitation is Tuesday, May 31 from 6 – 8 p.m. at Wright Funeral Home in Franklin. A graveside funeral will be held on Wednesday, June 1, at 11 a.m. in Hollywood Cemetery in Newsoms.