FRANKLIN – Charles Gage Kitchen, 92, widower of Nettie Dunn Kitchen, passed away on May 27, 2022 in Southampton Memorial Hospital. Born in Yale, he was the son on the late Samuel Fenton Kitchen and Marian Swift Kitchen. He was also predeceased by three sisters, Marilyn Vick, Adelaide Harrup and Audrey Coppedge and two brothers, Sam and Roger Kitchen. 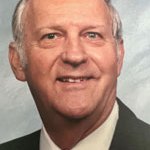 Charles was a graduate of Stony Creek High School and a retired application programmer in the Data Processing Department for Union Camp Corporation with over 30 years of service. Prior to going to Union Camp, he farmed with his brother, Sam for 20 years.

He was a charter member of the Yale Ruritan Club and a member of Antioch Baptist Church in Yale.

A funeral service will be held at 2 p.m. on Saturday, June 4 in Antioch Baptist Church with the Rev. Tom Guess officiating. Burial will follow in the church cemetery. The family will receive friends from 6 – 8 p.m. on Friday, June 3 in Wright Funeral Home and suggests that memorial donations be made to Antioch Baptist Church Cemetery Fund, 20230 Peter’s Bridge Road, Yale, VA 23897.