COURTLAND – Gail Paige Bunch Camp, 87, of Courtland, left this stage of her life to reunite with her husband, Stafford Vermont “S.V.” Camp III, in our Lord’s paradise. She passed away peacefully at her home in Southampton County, Virginia on May 12, 2022. She was preceded in death by her husband; parents, Thomas Waverly “T.W.” and Virginia Bunch; loving sister, Suzette Carpenito; and niece, Kelly Carpenito. 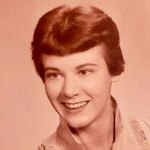 Originally from Boykins, Gail graduated from Richmond Polytechnic Institute (now VCU) where she was a star basketball player. She was a teacher and social worker, teaching school in both Franklin and in a one-room schoolhouse in McCoy (Blacksburg), before starting her family. She was a member of the Daughters of the American Revolution, supporter of the Southampton Historical Society and a member of the Country Acres Garden Club. She belonged to the Sebrell United Methodist Church and later St. Luke’s Episcopal Church in Courtland.

She was a huge fan and supporter of Virginia Tech, VCU and Southampton Academy. S.V. and Gail were among the founders of Southampton Academy. She loved spending time with her family and making everyone that visited feel welcome — a true, southern hostess. Along with caring for her family and friends, Gail enjoyed cooking, gardening and spending time on the beach — “sunnin’” in her Jackie O sunglasses while holding a Virginia Slim. You could always hear the twinkle of her many silver bracelets as she drank her sweet tea or played with her great-grandbabies.

Gail was one of the last of a glamorous, very lively era. She had many friends and will be missed by all who knew her. She was a loving wife and the very best mother that her four children could ever ask for. During good times and bad times, she always made everything seem better for her family.

In lieu of a visitation, the family will welcome friends to Gail’s home on Monday, May 16 from 5 – 8 p.m. A graveside service will be held on Tuesday, May 17 at 2 p.m. at the Barn Tavern Cemetery in Sebrell on Carys Bridge Road. In lieu of flowers, the family requests donations to the Southampton Historical Society, c/o Lynda Updike, 33335 Statesville Road, Newsoms, VA 23874

. The family would like to thank her wonderful caregivers for their love and support.