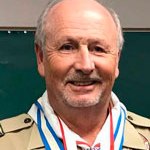 Jim was educated in the Isle of Wight County school system and continued his studies at Paul D. Camp Community College before beginning what would be a long career in grocery and retail stores.

Outside of work, Jim’s passion was his involvement in Scouting (Boy Scouts of America). One of five brothers, Jim was raised in a scouting family that led to lifelong service. After achieving the rank of Eagle Scout, Jim received additional honors including the Wood Badge, District Award of Merit, God and Service Award, Wateree District Commissioner Emeritus Award, the Silver Torch Award and the Silver Beaver Award.

Jim’s love of sports and people led to involvement in the local pickleball league, which became one of his favorite pastimes during retirement. Jim was also an active member of the Lyttleton Street United Methodist Church in Camden, South Carolina.