FRANKLIN – Gene Mercer Correll, a 16 year resident of the Cottages at the Village of Woods Edge in Franklin, passed away on April 12, 2022 at the age of 92. He was predeceased in death by the love of his life, Mary Ann Dunn Correll, his wife of 65 years. 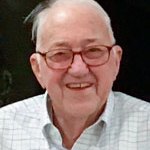 He is survived by three children, Nancy (Tom) Brinkley of Smithfield; Rebecca (Frank) McClendon of Jefferson, North Carolina and Balfour (Janice) Correll of Atlanta, Georgia; two granddaughters, Mercer McClendon of Richmond and Caroline McClendon of Arlington, Virginia; a sister, Shirley (Bill) Hucaby and a niece and nephew, all of Fort Worth, Texas.

Gene was born on November 25, 1929 in Monticello, Kentucky to the late Cecil and Nannie Correll. He was called to active duty in January 1951 and served until October 1952 in the 623rd Field Artillery Battalion of the Kentucky Army National Guard during the Korean War.

Following military service, Gene attended Wake Forest College, was a member of the Sigma Chi fraternity and graduated in 1954. While there, he met Mary Ann Dunn, who he married on June 5, 1955 in Scotland Neck, North Carolina. By that point, Gene was a graduate student at the University of Tennessee (Knoxville, TN); he received his master’s degree in chemistry in 1956.

Gene began his professional career later that same year as a researcher for the West Virginia Pulp & Paper Company (Westvaco) in Covington, Virginia. While there, he served as a Scout Master for the Boys Home of Virginia and the experience led him to become a lifetime supporter of the organization. In 1961, he transferred to Westernport, Maryland and was instrumental in starting up the widest coated paper machines at the mill in Luke.

In 1967, Gene joined the Union Camp Corporation Fine Paper Division and relocated a final time to Franklin. His remarkable 24 year tenure with Union Camp spanned numerous roles and responsibilities, culminating in his role as general operating superintendent, which he held when he retired in 1991.

Gene was an active member of Emmanuel Episcopal Church and served in many roles throughout his lifetime, including Sunday school teacher, vestryman and junior and senior warden. He served on the board of Franklin City Schools for six years, serving as chair of the board for five, during which time Joseph P. King Jr. Elementary School was renovated and modernized and the vocational building was constructed at Franklin High School.

Gene was an avid reader and lifelong student in many subjects and had many hobbies. Gene took particular joy in playing golf and bridge, as well as his woodworking. He and Mary Ann loved the beach and enjoyed spending several months a year at their cottage in Kill Devil Hills, North Carolina in their retirement with family and friends.

Gene’s surviving family extends their appreciation to the care providers at Comfort Keepers, who enabled him to remain in his home until his passing, expressing special gratitude to Shanika Holley, Khalilah Whitehead, Angela Hayes, Keianna Williams, Arleen Everette and Shawna Heltman for their excellent care, humor and companionship.

Memorial donations may be made to either: the Endowment Fund at Emmanuel Episcopal Church, P.O. Box 146, Franklin, VA 23851 or the Boys Home of Virginia, https://boyshomeofva.org/ or 414 Boys Home Road, Covington, VA 24426.