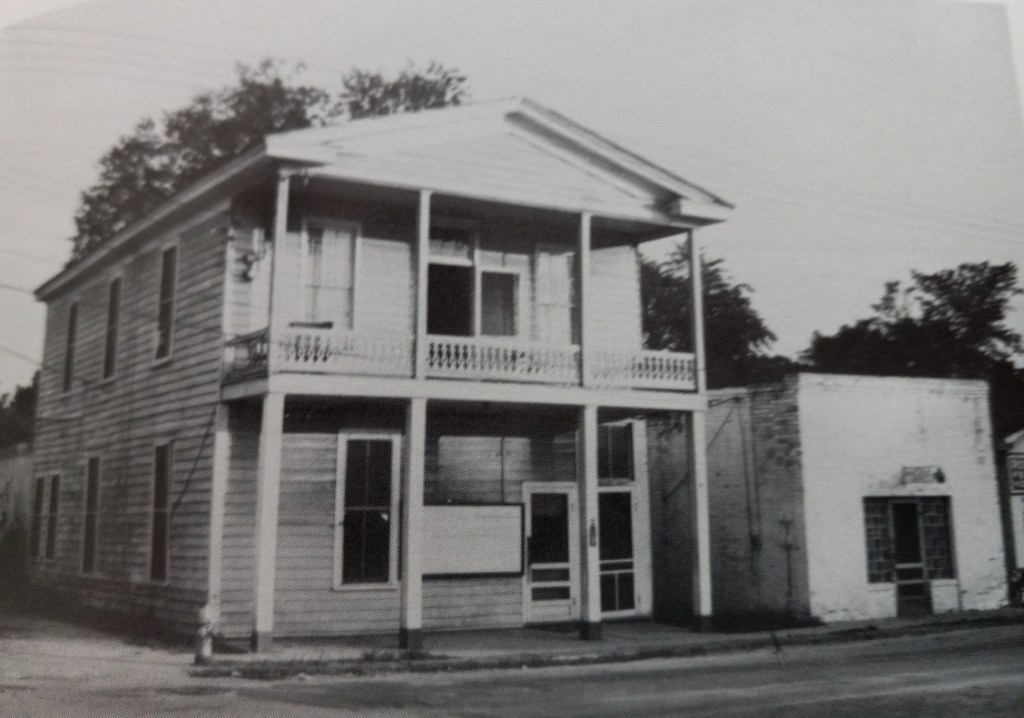 Town Hall at Franklin Street and First Avenue was remodeled to house the offices of mayor, town manager and town sergeant on the first floor; the upper floor continued as the municipal courtroom. (Photo submitted by Clyde Parker)

On March 21, 1922, at a mass meeting of Franklin townspeople, a definite step toward the adoption of a town manager form of government was initiated. When Franklin officially became a town in 1876 and established a mayor-council form of government, a mayor, six councilmen, a recorder, a sergeant and a street commissioner were elected. Essentially, in those days, the mayor ran all administrative functions of the town.

An investigating committee report on the matter was presented by Councilman Paul Scarborough stating that the chairman, W. T. Pace, had written to seven towns in Virginia, North Carolina, and other nearby states, of the approximate size of Franklin, asking for information on their experience with a town manager system. But, as of the report, only two had replied: Blackstone, which was smaller than Franklin, and Radford, which was larger. Responses from the mayors of those towns indicated that the system was working well in their respective places and was giving general satisfaction from every angle. The committee report stated that unsatisfactory conditions in Franklin would be remedied, if not obviated altogether, by the town manager plan; this belief actuated the committee to advocate for its adoption. However, Franklin’s adoption of the plan could not be done without legislative action – to amend the town charter – by the Virginia General Assembly which, at that time, was in the closing days of its 1922 session. In view of that fact, the committee proposed that the matter be pursued at the start of the 1923 session, and issued the following statement: “In the meantime, we recommend that at the primary election to be held on April 4, qualified voters of the town be given an opportunity to express their wishes as to whether the town should have a town manager for the purpose of conducting the affairs of the town as provided for in the commission-manager form of town government.”

However, suddenly, the campaign for a town manager form of government in Franklin took a different turn when it was learned that a new procedure had been established. Instead of a preferential primary, petitions could be circulated to secure signatures of a majority of qualified Franklin voters asking the Southampton County Circuit Court to allow the town to change its charter from the present town council/ mayor plan, as provided under its original charter, to the commission-manager form. This would be done in accordance with an act of the Virginia General Assembly, adopted in 1920, which permitted a change in a town charter without legislative action – but by open petition.

So, as of Friday, March 31, 1922, of the 214 men and 202 women voters, something more than the requisite 260 signatures on the petitions were secured. Judge James L. Mclemore and Southampton County Clerk Harvey Burton Mclemore, Sr. were in town the next day; the petitioners went before them and the proper decree was entered by Judge Mclemore changing the charter of the town, permitting the adoption of the commission-manager from of government.

It was then announced that the nominees for the town commission under the new form of government would be selected at the regular municipal election to be held on June 13, 1922. A town commission will be elected: five men – one of which will be selected by the other commissioners to be mayor.

The Friday, May 19, 1922 edition of The Tidewater News reported that eight Franklin citizens had declared their candidacy and had filed their applications to be included on the June 13 ballot: Roger I. Beale, Vaughan Camp, Claude J. Edwards, L. Ross Jones, J. E. Lawrence, Dr. W. E. Snipes, W. H. Stroud, and John A. Williams. It is understood that Mr. Edwards will be a candidate, if elected as a commissioner, for the position of mayor and police justice.

Following the June 13 election, The Tidewater News reported the election of the following with votes as indicate d: Roger I. Beale, 270; Claude J. Edwards, 264; L. Ross Jones, 250; Dr. W. E. Snipes, 181; and John A. Williams, 146. The losers were Vaughan Camp with 120 votes, J. E. Lawrence with 96, and W. H. Stroud with 68. The new commissioners will take office on September 1, 1922 and serve terms of four years, without compensation. In the interim, a town manager will be hired for a term of three years with a starting date of September 1.

The September 1, 1922 edition of The Tidewater News reported that the new town commissioners have taken office and that Claude Edwards was elected mayor and also serves as police justice. It was also announced that a town manager had been hired – H. L. Beach, formerly of Chicago, Illinois and more recently of Craddock, Virginia. All functions of the town government are to be under his direct control except as to law enforcement which is under the jurisdiction of the mayor. The town sergeant reports to the mayor. L.A. Gay was re-appointed as town recorder: chief clerk and accountant. Town Hall at Franklin Street and First Avenue has been remodeled to house the offices of mayor, town manager and town sergeant – on the first floor; the upper floor continues as the municipal courtroom.

Franklin’s population at that time was 2,700.

Currently, Amanda Jarratt serves as Franklin’s city manager. She was appointed to the position effective January 28, 2019. Prior to that, she was president and CEO of Franklin-Southampton Economic Development, Inc.