FRANKLIN – Sandra (Sandy) Skeen Spengeman, 75, passed away peacefully at home in Franklin on March 17, 2022. She was born on March 13, 1947 in Lebanon, Virginia, the daughter of the late James Taylor Skeen and Lucille Howard Skeen. She grew up in the beautiful mountains of Southwest Virginia on her family’s farm, Twin Maples. 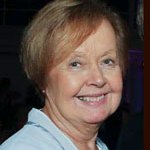 She was a 1965 graduate of Lebanon High School and a proud graduate of the College of William and Mary with a bachelor’s in Ancient Languages and later a master’s in education. Don and Sandy fell in love in college and were married on May 16, 1970 in Sandy’s hometown church, Elk Garden United Methodist. They moved to Franklin and she began her career teaching Latin at Windsor High School. She later taught many years at Franklin High School and finally retired from Oscar Smith High School in June 2012. Sandy was greatly admired as a Latin teacher and was an active member in the Junior Classical League. She is still known to many former students as “magistra.”

Sandy’s greatest love in life was her family. She was a devoted wife, loving mom and adoring ”Gammaw” to her five grandchildren. Sandy loved to travel and planned many trips for her and Don including Scotland, Cuba and Norway among others. She also treasured her many visits with family on “the farm” in Rosedale, Virginia, where she grew up. When not traveling, Sandy spent many hours reading, playing with her grandchildren and cheering on her beloved Virginia Tech Hokies. She was an active member of the Franklin Book Club and a longtime member of High Street United Methodist Church.

Sandy’s family would like to thank the staff at Virginia Oncology, Sentara Obici Hospital and Sentara Hospice, who showed them such compassionate care. They are also so very grateful to all of the family and friends who provided so much love and support over the past several months.