FRANKLIN – Robert G. Edwards, M.D., of Franklin, VA, 85 years old, died on March 18, 2022. He was the son of the late Fred David Edwards and Essie Mae Vinson Edwards. He was also predeceased by his first wife, Mona Edwards. 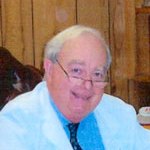 Robert was a 1953 graduate of Franklin High School and graduated from the University of Virginia (Col ’57, Med ’61). While there he lived on the Lawn his fourth year of undergraduate school and was elected to Phi Beta Kappa. He belonged to Theta Delta Chi fraternity and served on the staff of the Cavalier Daily and was a member of Skull & Keys. After graduation he entered the University of Virginia School of Medicine and lived on the Range for two years. He did his internship and internal medicine residency at Norfolk General Hospital and served as chief resident of Internal Medicine his las two years.

After completion of his internal medicine residency, he returned to his hometown of Franklin and entered private practice and joined the staff at Southampton Memorial Hospital. Always interested in cardiology, he was instrumental in founding the Cardiac Intensive Care Unit at that hospital. He became director of the ICU and served in that capacity for 30 years. He and his wife, Sandy, a CCU nurse at SMH, established many of the rules, by-laws and procedures of that unit.

Early on he was active in the Tidewater Heart Association. He and Jim Wagenbach, chief of the Fire Department and Rescue Squad, taught CPR to the rescue squad and the hospital nurses. He helped establish the Bio Ethics Program at the Hospital and served as chairman of that committee for several years.

He was a member of the Franklin Rotary Club, the Franklin Baptist Church, the Cypress Cove Country Club and the Franklin Shag Club. Dr. Edwards practiced medicine a total of 54 years in his hometown of Franklin.

He loved his family and together they enjoyed their many good times spent at UVA sporting events. He took every opportunity to go back to Charlottesville for meetings and reunions. He also had a great fondness of the beach and often spent time at the Outer Banks and Virginia Beach.

A funeral service will be held at 11 a.m. on Monday, March 21 in Franklin Baptist Church with Dr. Charles Qualls and the Rev. Steve Gibson officiating. Burial will follow in Poplar Spring Cemetery. A reception will be held in the church Fellowship Hall following the service. The family suggests that in lieu of flowers, memorial donations be made to Franklin Baptist Church.