FRANKLIN – Marjorie Verburg Moran, 91, was born in Santa Anna, California to the late Lamburtus and Cornelia Verburg, who were Dutch immigrant dairy farmers. The family of 11 children relocated their home from California to the Fredericksburg, Virginia area during the Great Depression and entrepreneurially prospered in the family owned/operated hotel business. Marjorie or Meitje in Dutch, was commonly known as Met to friends and Gram to her 10 grandchildren and six great-grandchildren. 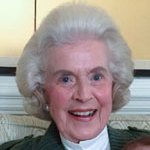 Met was married in 1950 to the late Clayton L. Moran (The Colonel), a West Point graduate and artillery officer, who served a distinguished career of 44 years. He was a highly decorated veteran, serving in both the Korean and Vietnam wars. Through the years he and Met lived in many locations in the U.S. and internationally, as they raised three children. They settled in Springfield, Virginia for the bulk of retirement years. Their surviving children are Patti Rabil of Franklin, Clay Moran Jr. of Palm Beach Gardens, Florida and David Moran of Cape Charles, Virginia.

Met was a homemaker extraordinaire as she dedicated herself to her family and support of Clay’s career. Her receptive sacrifices were a true model for us all in giving, living by values, love and thankfulness… always at her best and always gracious and pleasant. Her lessons and ways are ingrained in her family and admired by her friends. She touched so many and will remain part of us all.

Met lived her final seven years with Patti and David Rabil in Franklin, which became the homebase for the family. Her golden years were truly special thanks to the love and care by Patti and Dave. Her most enjoyable event of the year was a large family summer vacation week in Duck, North Carolina. That tradition set and insisted by Clay and Met will be carried on.

A gathering and remembrance celebration will be held at Fred’s Restaurant on Main Street in Franklin starting at 5 p.m. on Thursday, March 24. Met will be buried next to Clay at Arlington National Cemetery at a later date to be scheduled.