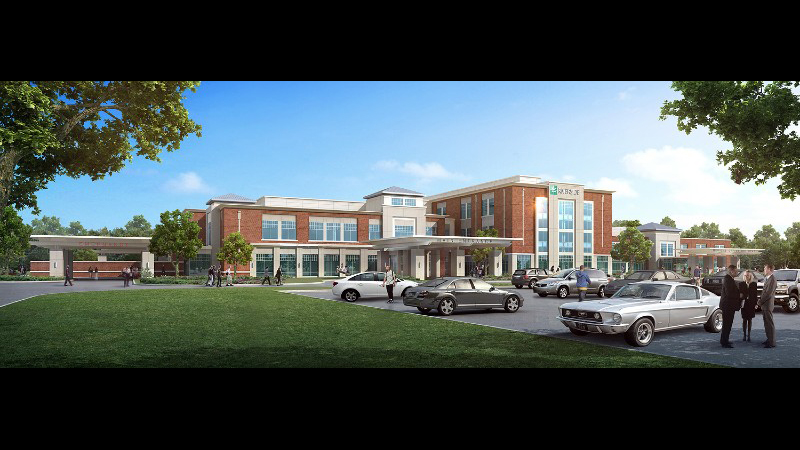 This is an artist’s rendering of the proposed new Riverside hospital in Isle of Wight County. Submitted | Riverside Health System

“Maintaining the status quo is not a preferable alternative as it does not reasonably respond to demonstrated growth and development in Isle of Wight County, and beyond,” Greene wrote in his decision.

The Isle of Wight County project, he argues, would “improve geographic and financial access to hospital services and emergency medical services for residents … many of whom live in rural areas and federally-designated medically-underserved communities.” It would also “introduce an element of beneficial competition” in an area that “currently displays marked concentration of resources and services in its health care market.”

“We are very excited, especially for the residents of Isle of Wight, Surry and Western Tidewater, said Bill Downey, Riverside’s chief executive officer. “We think this will be a great addition to that community.”

Isle of Wight’s assistant county administrator, Don Robertson, said he was “ecstatic” at news of the project moving forward with the state’s blessing.

“We certainly want to thank Riverside’s leadership team, our community leaders and stakeholders, for their engagement and feedback during the process,” Robertson said. “We view this as really a community effort and I think the entire community will be able to share in the success of what they’ve done … It’s going to save lives ultimately.”

In October, VDH staff recommended denying Riverside’s application on the grounds that the proposed project “unnecessarily duplicates existing services already available in surplus” in Planning District 20 – a region that includes Isle of Wight and Southampton counties and the cities of Franklin, Suffolk, Chesapeake, Portsmouth, Norfolk and Virginia Beach.

Riverside appealed the recommendation at a December “informal fact-finding conference,” arguing the alleged “surplus of 229 medical-surgical beds in PD 20 for the five-year planning horizon” cited in VDH’s recommended denial was actually a 135-bed surplus by Riverside’s calculations, which becomes a 79-bed deficit when unstaffed beds are subtracted.

Riverside also took issue with the VDH’s listed travel times from Isle of Wight and Surry counties to Riverside Regional Medical Center in Newport News and Sentara Obici Hospital in Suffolk, arguing that ambulance trips in reality take upward of half an hour due to traffic congestion.

The hospital will be built on land Riverside already owns near the intersection of Benn’s Church and Brewer’s Neck boulevards, and is slated to open its doors by 2025. According to Riverside’s website, it will include an emergency department, a labor and delivery department with six obstetrics beds and a neonatal nursery, 34 medical/surgical beds, 10 intensive care unit beds, four operating rooms and diagnostic imaging services.