FRANKLIN – Mrs. Vivian Lillie Tidwell Wilkins was born in Franklin on March 26, 1929 as the only child of Johanna Tidwell and Ben Barnes. Vivian was raised in Franklin and attended Hayden Elementary and High School. 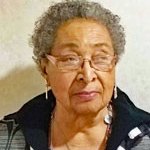 Vivian shared almost 30 years with her husband, Claude Wilkins before his passing. Vivian was also very proud of her children, grandchildren and great-grandchildren. She also loved making her famous rolls and cakes.

She was a founding member of New Hope Baptist Church and loved being the “Mother” of the church. She was dutiful in attendance, worked on various committees and volunteered to serve wherever she was needed. She was also a watchcare member at St. Paul’s Baptist Church in Richmond.

A public viewing will be held at the funeral home on Friday, March 18 from 2 – 6 p.m. A celebration of life will be held on Saturday, March 19, at noon at New Hope Baptist Church, 1315 Rosewood Avenue, Franklin, Virginia. On the day of the service, Mrs. Wilkins’ remains will rest in church by 10 a.m. Interment will be held in Southview Cemetery. Service provided by the professional and caring staff of Wm. M. Johnson & Sons Funeral Home, Inc. in Franklin.