‘The Cursed’ too inconsistent 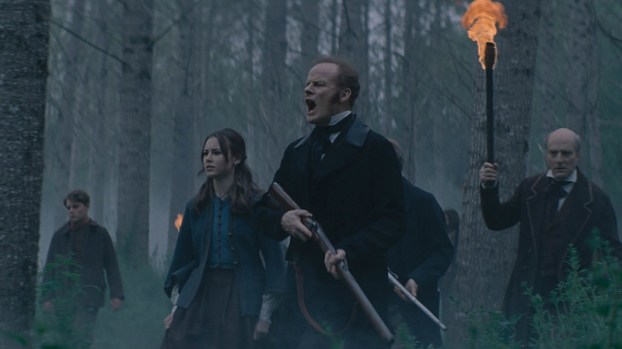 Kelly Reilly in the movie, "The Cursed." (Courtesy)

“The Cursed,” written and directed by Sean Ellis, is an inconsistent gothic horror film that fluctuates between having really cool ideas and scenes (think “The Thing”) to less exciting filler in between. I really liked the film’s atmosphere and style, but its creepy premise is at times lost in overly long periods of exposition and build-up. It’s honestly hard for me to even determine whether I liked the film because of this incongruity. An almost two-hour runtime, however, certainly doesn’t help.

Set in a 19th century French village, “The Cursed” follows the wealthy Laurent family, who are cursed after they expel (and massacre) a group of Roma that originally lived on the estate’s land. Everything comes to a head when young Edward Laurent (Max Mackintosh) goes missing and children start being brutally murdered. Is this a wild animal or something more supernatural?

Edward’s parents, Seamus Laurent (Alistair Petrie) and his wife Isabelle (Kelly Reilly), meet with a local pathologist (Boyd Holbrook) about the issue at hand; he believes a werewolf is on the loose and it’s up to them to put a stop to this. But, no surprise, things are going to get a lot worse before they get better. Will the family still be alive by the time it’s all over?

To be completely honest, the main reason I wanted to watch “The Cursed” was because of Kelly Reilly, one of my favorite actors working today. And while she unfortunately doesn’t have as big of a role as I would hope, she does make a lot of her scenes. In fact, her last scene (no spoilers) is brutal, but my favorite in the film. I am also a big fan of Boyd Holbrook, but his character is slapped into the middle of the film without giving the audience a real reason to care about him, a general criticism I have about all of the characters.

The real standout element in “The Cursed” is some of its more over-the-top, twisted scenes, which remind me of something we would see in a 1980s or 1990s horror film like “The Thing” or “Aliens.” I found myself cringing, while simultaneously thinking it was really cool. Still, the slower build-up unfortunately isn’t worth the payoff.

As I said, “The Cursed” may have some memorable scenes, but will overall probably not be a film you think about often. The vanilla title really doesn’t help either. It is definitely a film you can wait to rent, but it won’t surprise me if the most you see is its best scenes on TikTok or YouTube.