BOYKINS – Barbara Goelz McDowell, 94, passed away peacefully Feb. 21, 2022 in Franklin. She was born April 23, 1927 in Norfolk, Virginia to the late George Goelz Sr. and Catherine Sandifer G. O’Berry. Barbara was also preceded in death by her husband of 50 years, Charles Monroe McDowell in 1997. 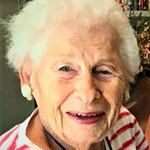 Barbara was raised in the West Norfolk section of Portsmouth by the Thomas’s whom she considered her bonus family. During WWII she met her future husband “Mac” while he was stationed in West Norfolk prior to his deployment to the South Pacific. Following her graduation from Churchland High School in 1945 and Mac’s discharge from the Army, they were married in 1946. By 1954, Barbara and the growing family had joined Mac, already in Boykins, where she assisted him in managing Purviance Funeral Home. They later purchased the business and renamed it McDowell Funeral Home and continued its operation until their retirement in 1993.

Barbara was an active member of Boykins Baptist Church and at the time of her death was its oldest living member. She was fully involved in the life of the church where she shared her musical talent with its and other choirs for many years. In addition to Barbara’s church ministry, she was a long-time volunteer at the East Pavilion, known for her green thumb, her love of knitting and the teaching of the art to others.

A graveside service will be held at 2 p.m. in Beechwood Cemetery, Boykins on Friday, Feb. 25 with the Rev. Brooks Gale officiating. There will be a reception immediately following the graveside service at Boykins Baptist Church, where the family will receive visitors.

Memorial donations may be made to Boykins Volunteer Fire and Rescue or a charity of your choice. Barbara was a strong believer in organ donation so please register at: www.DonateLife.net.

The family would like to thank Amy West and Emma Diggs for the care they provided our mother recently, which allowed her to live independently while remaining at home.