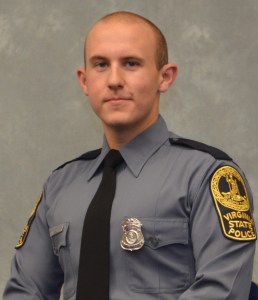 For Baker, it was the fulfillment of a lifelong goal, doing the only thing he ever wanted to do, making his contribution to a family legacy of state trooper service, achieving a higher standard.

Baker, 22, was one of 58 individuals comprising the 135th generation of Virginia State Troopers, and they were presented their diplomas at the academy in North Chesterfield County on Jan. 21, with Gov. Glenn Youngkin speaking at the ceremony.

“It was definitely an accomplishment of a lifetime,” Baker said, of graduating to become a trooper.

He noted that he has two uncles who have been Virginia State Troopers — the late Master Trooper Bill Whitehurst, who served with the VSP for about 45 years, and Sgt. Stephan Vick, who has been on the force for about 28 years and is on the governor’s executive protective unit.

“So it’s in the family,” Baker said. “I grew up around law enforcement as friends and family.”

He noted how parents ask their children, “What do you want to be when you grow up?”

He has always had the same answer.

It is kind of a hard feeling to explain, he said, but it’s a perspective that runs in his family that there is something different about being a trooper.

“It’s always been a higher standard, almost, and my family, my two uncles and all those that came before that I have always been around, they exemplify that to a T,” Baker said.

He noted that Vick played a special role in his graduation ceremony.

“State Police has always had the tradition that at graduation, if you have a relative, especially if they’re a member of the Virginia State Police, they can give you your diploma on stage at graduation, and he was the one to do that for me,” Baker said.

In pursuing his lifelong goal, Baker went to Paul D. Camp Community College for two years and then transferred to East Carolina University to earn his bachelor’s degree in criminal justice.

He noted that during his college career, he and his fellow students had to leave campus due to the COVID-19 pandemic, but he was able to pursue other opportunities back in his home county.

“I actually worked at the Southampton County Sheriff’s Office as a jail deputy for Sheriff (Josh A.) Wyche (Sr.),” he said. “I think that was about six, seven months I worked for them. I learned a lot there, just being able to talk to people, and I think that 110% prepared me for the academy and for what I’m doing now on the street.”

He noted that Wyche has been a great supporter of his through college, and Baker also served in an internship with the sheriff’s office when he was 20 and 21.

Baker said he and his fellow members of the 135th Basic Session began their 27 weeks of academic, physical and practical training at the academy June 29, 2021.

Since graduation, he has been assigned Area 36, which is Sussex and Surry counties, but his primary duty post is Surry County.

He is currently in the midst of six weeks of being paired up with a field training officer, learning about his new patrol area.

“This is still a part of my training phase,” he said, affirming that he will be a full-fledged state trooper after the six weeks — which started at the beginning of February — are over.

He said he has been thoroughly enjoying the field training.