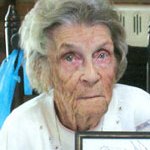 Erma was a retired postmaster for the Capron Post Office and a member of Capron United Methodist Church. She was an active part of the Capron community and served on the town council for many years. Full of spunk and energy and one to have never met a stranger, Erma, who was also known as Ma Dale to so many, was a wonderful wife, sister, mother, grandmother, great-grandmother and friend to all.

A funeral service will be held at 1 p.m. on Friday, Jan. 28 in Wright Funeral Home with Pastor Ron Carr officiating. Burial will follow in Capron Cemetery. The family will receive friends one hour prior to the service in the funeral home and suggests that memorial donations be made to Capron Methodist Church or any favorite charity.

The family would like to give a special thanks to Kindred Hospice, especially Angie and Ebony, for their kindness given to Erma.