FRANKLIN, VA – Peggy Smith Burgess passed away on Jan. 10, 2022 after a long battle with ovarian cancer at the age of 82. 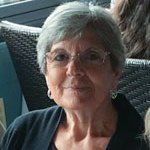 Born in Rich Square, North Carolina, she was the daughter of the late Joseph Smith and Ruby Outland. Peggy was a member of Rich Square Baptist Church and graduated from Rich Square High School before moving with her husband, Clyde Stanley Burgess, who preceded her in death in 2011, to Franklin.

Peggy was a fighter. No matter how sick she became, she was always determined to push through the pain to spend time with her family. When anyone else would have been broken and given up, Peggy was always ready for a Walmart run or wing night at the Pour House in Richmond. Although her outings became fewer towards the end, she never gave up her determination and perseverance to beat her illness.

“Nanny” as her grandchildren called her; never missed a milestone event for any of them. Nanny enjoyed watching her grandchildren play baseball and softball and would never turn down a road trip to Radford University. She enjoyed her annual Brunswick stew with family and friends hosted by David and Sharon Lee. She never missed an opportunity to come to Richmond for a weekend visit with her sons.

She was preceded in death by her older brother, Glen Smith.

A memorial service will be held at Kingdom Impact in Franklin, VA on Jan. 22 at 11 a.m.