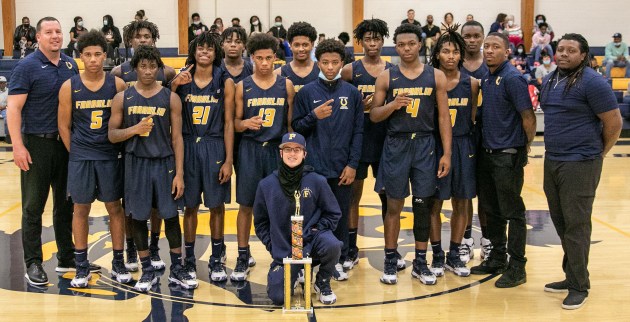 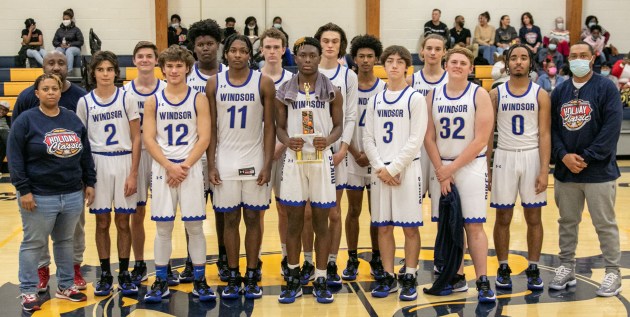 The Franklin Broncos varsity boys basketball team emerged as the champion of the 2021 Bluewater Rentals/Napa Auto Parts Holiday Classic basketball tournament that was held in the Peggy Wilkins Gym at Franklin High School.

Attendance was fair at the two-day tournament that tipped off on Wednesday, Dec. 29, with the Windsor High School Dukes defeating the Drifters of Colonial Beach High School, and the Broncos winning against the Amelia County High School Raiders.

These results led to a Thursday, Dec. 30, consolation game pitting Amelia against Colonial Beach. The Raiders defeated the Drifters with a score of 63-44.

For the championship game that followed, the Broncos played against the Dukes and took the lead early in the first quarter. Franklin was up 29-18 at the half and held on to claim victory with a score of 52-35.

In comments after the game, Broncos Head Coach Robby Cutchins stated, “It was a great two nights of basketball, and it is fun to always host this holiday classic. A big thank you to our sponsors, Bluewater Rentals and Napa Auto Parts, that (are) what make it all work to put this thing together.

“Hats off to Windsor, they have come a long way,” Cutchins continued. “They have a great program working over there, and the kids played extremely hard, and it showed last night in them getting a victory against Colonial Beach.

“As far as our kids, that is three big wins in a row,” Cutchins said. “Coming off the Southampton game, you are on a high, and you don’t know how you are going to respond. We played a great three quarters against Amelia last night to be able to beat a (Class 2) school and then turn around tonight and win another (Class 2) game. I am really proud of our kids to win three big games in a row and win the holiday classic. We look forward to a new year and what the next part of the schedule brings to us. We will get back to work and make it better.”

The Broncos had two players score 16 points in the championship game — Kenaz Jones and Derrick Perry.

Preston Davis led the scoring for the Dukes with 10 points.

Named to the all-tournament team were Perry and Jones for Franklin, Davis and Dontavious Hayslett for Windsor, Trenton Parkhurst for Amelia and Logan Coldwell for Colonial Beach.