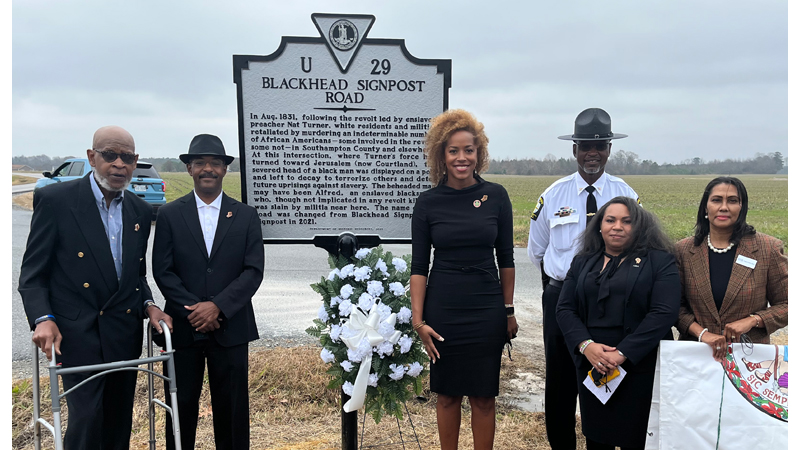 Southampton County community members and state and local elected officials gathered recently to commemorate the installation and unveiling of a state historical marker at the intersection of Route 35 and Signpost Road, the latter of which was recently renamed after having formerly been known as Blackhead Signpost Road.

A press release from the Virginia Department of Historic Resources noted that the state historical marker it had issued highlights one legacy of enslaved preacher Nat Turner’s revolt in Southampton County, when after the uprising the severed head of a Black man was displayed on a post and left to decay, giving rise to the name of Blackhead Signpost Road.

To many, this original name of the road came across as insulting and as making a mockery of the sobering history it alluded to, leading to the name change that was made possible by the community organization Citizens Create Change, founded by Toya Bynum, Travis Parker, Michelle Covington and Ricky Blunt.

A Blackhead Signpost Road Historical Marker Ceremony was held the morning of Dec. 11, starting first at Shiloh Baptist Church in Boykins before transitioning to the marker site in Courtland.

“Thank you all for being here to celebrate with us this major accomplishment of getting Blackhead Signpost Road renamed to Signpost Road and erecting a historical marker,” Parker said to those in attendance at the church. “We hope that you all feel a part of this success, as this was truly a community effort.”

He later added, “It is an accumulation of what God has done in each one of our lives in order for us to come together and be able to do something like this.”

As the ceremony continued, Bynum spoke, acknowledging the trust the community had put in CCC.

“I’d be irresponsible if I didn’t pause to say ‘thank you’ to our ancestors that constantly push us, the elders that encourage us to keep on keeping on, and the young people who are watching us,” she said.

She then shared the origin story of Citizens Create Change and some of what led up to the Dec. 11 ceremony.

“Back in 2015, I created a Facebook post that expressed my general concern about the street names and constantly hearing from friends all across the nation that they could not believe that these places actually existed,” she said. “I didn’t have any real expectations from that initial Facebook post; I just really wanted to call attention to it. That was not the right time for this work to begin, but the seed was planted.”

She said five years passed and the world was flipped upside down.

Protests were happening across the nation in response to the murder of George Floyd while in police custody in Minneapolis, Minnesota. It was at that time the latest in the growing list of reports of unwarranted police killings of African Americans in recent years.

Bynum noted that in addition to the prominent protests, change was happening in the form of governments voting to take down Confederate statues.

“This was our time,” she said of Citizens Create Change. “So again, I created a Facebook post directed to Gov. (Ralph) Northam, calling his attention to concerns in Southampton County, specifically Blackhead Signpost Road.”

She said, “I shared my disgust to the name and its insulting nod to free and enslaved blacks that met their end after the rebellion of Nat Turner. In my opinion, naming the street Blackhead Signpost Road made a mockery of the atrocities of the day. Remember, free or enslaved, these were still humans. I ended the post by stating, ‘For years, people have petitioned for these to change to no avail… however, it’s a new day! As the nation is changing, Southampton County must too change. It’s time… and I got time!  Let’s be the change…’

“That post was shared over 300 times and started some critical conversations in this county,” she continued. “Now, everyone was not a fan of my opinion; people were talking, though, and that was the critical first step.”

She said there were some very strong opposing messages sent that were quite discouraging, but ultimately there were more people across generations and ethnicities that supported CCC’s work.

“So I kicked off a Change.org petition and garnered almost 9,000 signatures with overwhelming support across this nation,” she said. “At this point I realized that I needed to organize, as this was becoming bigger than me.”

She stated that Parker reached out to her, having seen her social media post, and he had been in talks with Blunt.

“That was the exact push I needed, but not too fast,” she said. “I wanted somebody else to join me in this journey, someone that I trusted, but we were on opposing sides. Michelle was like family to me, but she was opposed to changing the name for the sake of losing history.

“This was always a huge risk in our work in changing the street name,” Bynum continued. “We had an honest and transparent conversation and talked about changing the name but also how to preserve this important history. This is a real-life example of how people with differing views can still work together. This is how Citizens Create Change was born — real people doing real work making real change.”

“We raised over $2,000 in funds in hopes that today would come to be,” she said. “We held Q&A sessions in our group explaining the process of how decisions are made locally and encouraging citizens to speak up and be present.”

She said the organization educated citizens on the power they hold and the importance of their voice.

“We learned that before the street name was to be changed, we had to first focus our attention on the antiquated ordinance which controlled the street renaming process for the county,” she said. “Citizens Create Change showed up time and time again, ensuring that our voices were heard.”

Before Covington came up to share the next part of CCC’s story, Bynum said, “I have to say I am extremely humbled by the support of this community and the trust you had in us. There is no scenario where this work could have been done without your prayers, support and encouragement.”

Covington’s speech focused on the occasion everyone was gathered for Dec. 11 and specifically what led to it.

She noted that the committee that gave the road its original name undoubtedly faced some backlash, but she said she was grateful members of this committee had the nerve to do their part and maintain the history of Blackhead Signpost Road.

“Understandably, as times change and we all become more socially aware, it was clear the road sign alone was not enough to represent this tragic history, and to many it felt more like an insult than a nod to the past, and that’s the wrong we set out to correct,” she said.

Covington pointed out that many had tried to change the name of Blackhead Signpost Road in the past.

“However, they were unsuccessful mainly because changing a road name in Southampton County required 51% of landowners’ signatures, a task that is nearly impossible with many landowners residing outside of Southampton County and some outside the state of Virginia,” she said. “So that is where our work began.”

She said CCC first attended a Southampton County Board of Supervisors meeting virtually in June 2020, at which point the board entertained the idea of amending the ordinance so that the signatures of landowners would not be the only avenue to rename roads. Alternatively, the board itself could initiate the renaming process if petitioned by residents with justifiable cause.

“There was opposition against this change, but ultimately the ordinance was amended, and this was a major win for us,” Covington said.

After the ordinance was changed, the next step for Citizens Create Change was to present its case for changing the name of Blackhead Signpost Road, along with suggestions for a new name.

“We attended the Board of Supervisors meetings and the Planning Commission meetings every time the issue of Blackhead Signpost Road was on the agenda,” she said. “Supporters from the community and around Virginia, the country and even the world sent letters to our local government, and several supporters attended meetings with us, and some even spoke at the meetings themselves.

CCC’s first suggestion for a new name was Alfred Road, referencing an enslaved man whom the original road name may have been referencing. Covington said though this is likely, it has not been proven, and ultimately CCC went with its backup plan for a name — Signpost Road.

“After the name was changed, the next step was securing the historical marker,” Covington said. “We used our research to complete the application and collaborated with the DHR staff who was open to discussion and committed to getting the marker text right. Once we were able to come to terms on the text, it went through the approval process with the Department of Historic Resources and was installed in November 2021.

“Today we will unveil the marker which will stand to educate generations to come and to honor our ancestors who were once disregarded in life and death,” she said in conclusion.

Later in the ceremony, Covington’s daughter, eighth-grader Laila Beck-Covington, read the text of the marker, which is located at the intersection of Route 35 and Signpost Road in Courtland.

The marker, which bears the title “Blackhead Signpost Road,” reads as follows: “In Aug. 1831, following the revolt led by enslaved preacher Nat Turner, white residents and militias retaliated by murdering an indeterminable number of African Americans — some involved in the revolt, some not — in Southampton County and elsewhere. At this intersection, where Turner’s force had turned toward Jerusalem (now Courtland), the severed head of a black man was displayed on a post and left to decay to terrorize others and deter future uprisings against slavery. The beheaded man may have been Alfred, an enslaved blacksmith who, though not implicated in any revolt killings, was slain by militia near here. The name of this road was changed from Blackhead Signpost to Signpost in 2021.”

Dr. Colita Nichols Fairfax, former chair of the Virginia Board of Historic Resources, spoke during the ceremony about the significance of CCC’s achievement with regard to the historical marker.

“Virginia’s first historical roadside markers were erected in 1927, making ours the oldest state marker program in the entire country,” she said. “Since then we’ve placed more than 2,800 signs across the commonwealth. Only about 380 markers, however, reflect African American history and culture.

“In 1976, the commonwealth stopped funding new markers, and so now in most cases we rely on private organizations such as historical societies, churches, alumni associations, advocacy groups, such as Citizens Create Change, cities and municipalities to apply for new markers and pay for their manufacturing,” she continued. “The application process is quite rigorous. Each potential marker topic must display regional, statewide or national significance, and the information on the sign must be thoroughly documented.”

She noted that given the high standards of the marker program, “the dedication of this new sign is certainly reason for celebration.”

“This project educates the public about Virginia’s history, linking important stories to the very landscape where they took place,” she said.