Route 671 over Nottoway River to close for 2nd bridge replacement 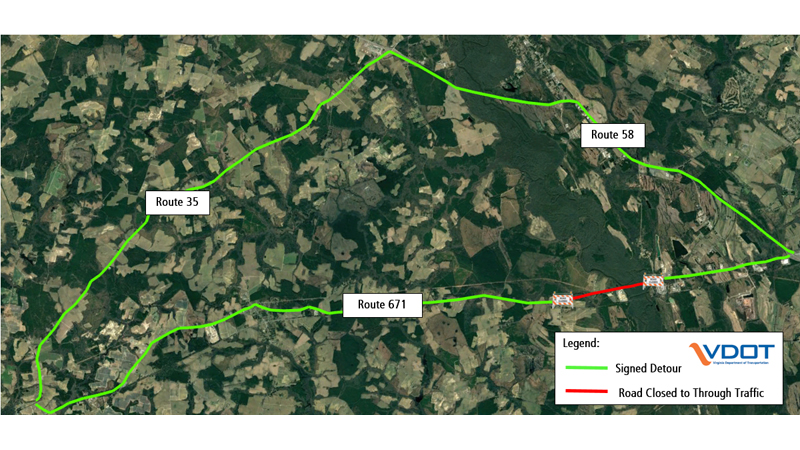 Motorists will utilize Route 35 and Route 58, following detour signs during the closure of Route 671 over Nottoway River that could begin as early as Monday, Jan. 3, and is estimated to last through fall 2022, allowing for completion of a bridge replacement project. (Photo/graphic submitted by the Virginia Department of Transportation)

Beginning as early as Monday, Jan. 3, contractor crews with the Virginia Department of Transportation are scheduled to close Route 671 (General Thomas Highway) to through traffic between Shady Brook Trail and Handsom Road following a seasonal temporary opening. This upcoming closure is estimated to last through fall 2022, allowing for a project to continue that will include replacement of the second bridge over Nottoway River.

The VDOT press release continued by noting that the overall project consists of replacing the two existing bridges over the Nottoway River to meet current design standards, with the first bridge (overflow bridge) having been completed and reopened in September 2021. The improved bridges will consist of two 12-foot lanes with nine-foot shoulders along with improvements to the bridge approaches and stormwater management facilities.

During this closure, access will be maintained for all businesses and residents along Route 671 between Shady Brook Trail and Handsom Road. Signed detours will be in place directing traffic to Route 58 (Southampton Parkway) and Route 35 (Meherrin Road) as follows:

Residents in the nearby vicinity of the Route 671 bridge over Nottoway River can expect to hear some construction noise during these operations as crews work shifts around the clock until mid-February with the ultimate goal of delivering the project safely, under budget and on schedule.

Crowder Construction Company was awarded the $11.8 million construction contract and began work in fall 2020, with road closures starting in early 2021. The bridge replacement project is estimated to be complete in fall 2022. All construction schedules are pending, due to weather or unforeseen circumstances.

To learn more about this project, visit www.virginiadot.org/projects and under “Projects and Studies by Region” click on “Hampton Roads.” On the ensuing page, in the “Under Construction” section, click on “Route 671 (General Thomas Highway) Over Nottoway River Bridge Replacement.”