SEDLEY – Anthony Kevin Wyche was born in Southampton County on July 6, 1965, to Moses and Ella (Hicks) Wyche. He was born in the neighborhood known to most as “The Quarters.” He gained his heavenly wings on Wednesday, Dec. 22, 2021. 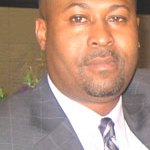 Anthony gave his life to the Lord at an early age while attending Mars Hill Baptist Church in Capron, VA. He learned the power of prayer at the age of nine when he suffered a brain aneurysm in January 1975. Being told he would never play any contact sports; he played many sports and became a good athlete. For several years he accepted the request of his neurosurgeon to speak and be a witness to other patients who had survived a brain aneurysm.

Anthony, affectionately known as Ant, Coach, Easy and Uncle Anthony was a kind and compassionate man, but don’t make him angry (Lol). Anthony was an avid reader and there were few topics he had not read or explored. He was a die-hard Dallas Cowboys fan and he spent much time in his mancave watching sports, listening to music and DJ’ing. He was introduced to car racing at the age of five and enjoyed attending any quarter-mile event. His all-time favorite TV series “A Man Called Hawk” started his love for BMW’s. He also enjoyed racing and riding his motorcycle and attending car shows.

Anthony attended Healing Chapel Baptist Church in Suffolk. He was affiliated with the Freemasonry Fraternity, the Shriners Fraternity and a former member of the Friendly Riders and Cobra One Motorcycle Club. He was currently serving as the vice president for the Virginia Finest Motorcycle Club. Anthony was known by many. He was fun-loving, full of humor, big trash-talker who enjoyed making people laugh. Additionally, the well-groomed Anthony took immense pride in his appearance – always looking good and smelling good.

A celebration of his life will be held at noon on Saturday, Jan. 1, 2022 at White Oak Spring Baptist Church, 26125 Delaware Road in Franklin with Minister Morris Almond delivering the message of comfort. Pastor Melvin Wofford, Pastor.

Interment will be at Capron Cemetery. A wake service will be held on Friday, Dec. 31 from 6 – 8 p.m. at Engram Funeral Home.