FRANKLIN – Opal Edwards Elks passed away on Dec. 29, 2021 at East Pavilion. She was born on March 31, 1936, to the late Walter and Cora Edwards. Along with her parents, Opal was predeceased by her brother, Walter “Pat” Edwards and her son, Gerry Elks. 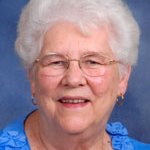 Opal was a native of Chocowinity, North Carolina. Upon moving to Franklin in 1960, she worked for a few years at Union Camp, but spent most of her career at Bristow Insurance Company. Opal was a member of Franklin Baptist Church where she served in several leadership capacities. A devoted mother of two sons, Opal was a Cub Scout den mother, who inspired many young men to do their best. In recognition of her service and positive influence, Opal was awarded BSA’s Silver Beaver and Good Shephard awards.

Opal loved life and appreciated beauty in all its forms. A good day in her book included reading and learning something new about an interesting person or fascinating place and mapping out or going on a trip with her husband. Opal believed her three granddaughters were the Lord’s reward for raising two boys and was most delighted when her family gathered around her table and enjoyed a feast of their favorite foods that she’d lovingly prepared.