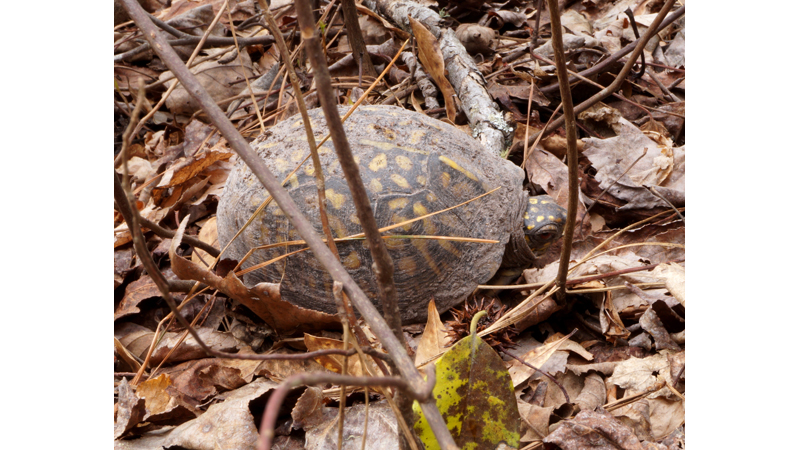 I decided to go out to the garden on a late October afternoon to do a little seasonal work, when my dog, walking ahead of me, discovered something at a yard bench that captured his attention. He sniffed at the leaves beneath it and then not being interested, walked away. I looked to see what had grabbed his curiosity and saw a box turtle. The turtle was slowly pushing its way under the leaves that had accumulated there. I wanted a photo of this, so I ran for the camera. After returning, I watched it for about five minutes as it slowly and methodically pushed its way head first into the leaves and small vines. I was aware that box turtles had this tendency to seek a measure of protection as it passed the night, but this was the first time I had the occasion to witness that playing out. It would sit in place until the morning arrived and then be off on its way, doing what little box turtles do.

That is how they spend their nights, but what about overwintering?

It turns out that these guys are quite tough and can take a fair amount of cooling off and still remain OK, no worse for the wear. With the change of seasons, as the temperature begins dropping, the turtles will seek the safety of a wooded lot or forest, find an elevated area so as to minimize the risk of a high water table from winter rains, and dig in under the leaves and loose/sandy soil trying to get as deeply as their blocky shell will allow. Since they aren’t able to dig deeply enough into the soil to completely escape the low winter temperatures, when it does become quite cold around them, they have the ability to shut down some of their bodily functions in order to remain alive. And to further show their resiliency to the coldness, they are even able to withstand freezing of a portion of the water within their body. As long as this extreme situation doesn’t last very long, say no more than a couple of days, they’ll come out of their hibernation OK. At one point through the years I have actually happened upon a freshly emerged box turtle one day in late March. It was easy to tell because it was covered with dirt that had dried to its shell.

Clam kill on the Nottoway