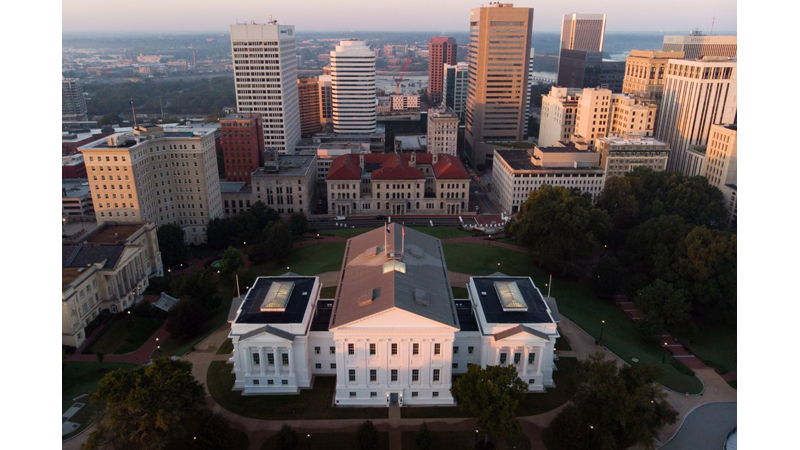 The sun rises over the Virginia Capitol. (Photo by Ned Oliver/Virginia Mercury)

Beginning in January, Virginia Medicaid will eliminate its final restriction to the treatment of hepatitis C — the need for providers to receive prior authorization for the medication.

“This is something that’s been really, really cumbersome,” said Robin Lord Smith, a patient advocate in Floyd and community engagement coordinator for the National Viral Hepatitis Roundtable. Over the last eight years, treatment for the disease has gone through a revolution, and most patients can be cured through two medications formulated into a single daily pill. Despite the advances, providers working through Medicaid have to fill out pages of paperwork justifying why a patient needs the treatment.

“We were thankful that Medicaid would even pay for it,” said Paula Hill-Collins, vice president and clinical director for The Health Wagon, a free clinic in Southwest Virginia. Still, getting approval meant filing documents with a patient’s viral load, the genotype of the virus and other risk factors, including whether a patient was using drugs or alcohol.

The Health Wagon, a free clinic in Southwest Virginia, operates a mobile van to offer medical appointments to underserved patients in rural areas. (Courtesy of The Health Wagon)

When patients were diagnosed at one of The Health Wagon’s mobile clinics, spotty internet in far-flung rural areas sometimes forced providers to fill out the forms at home, according to Hill-Collins. Authorization could take weeks, and the process became another burden for largely volunteer clinicians serving some of the most vulnerable people in the state.

“These providers are really there out of the goodness of their heart, and we’re asking them to spend hours on the phone getting someone treatment they could be treating other patients,” she said. “It’s just a huge, huge barrier.”

For years, though, prior authorization was the least of most doctors’ concerns. Peeling back the barriers to hepatitis C treatment in Virginia has been a process years in the making, driven by the last decade’s explosion in opioid use.

Transmission of the virus, which can cause serious damage to the liver, is now largely driven by sharing needles and other materials used to inject or snort drugs. Nationally, more than 70 percent of new cases with known risk factors occur among people who inject drugs, according to data from the U.S. Centers for Disease Control and Prevention.

Experts worry the crisis is only going to get worse. The number of acute cases (which typically lead to chronic infections) spiked in Virginia between 2018 and 2019 according to the most recently available data from the state Department of Health. But the department acknowledges that surveillance in general is limited by several factors. Only about 20 percent of patients with new infections experience symptoms, limiting the likelihood they’ll be screened for the virus. Lord Smith said stigma is another huge challenge, and makes it less likely people will seek out care.

“Working with folks who use drugs or in marginalized communities, you would not believe the way some people have been treated,” she said. “And internalized stigma is very real.” Beyond those biases, some local health departments have acknowledged that staffing challenges make it difficult to track and investigate every case of chronic hepatitis C.

Meanwhile, over the course of the pandemic, drug overdoses in Virginia have skyrocketed. From April to June of 2020, the state recorded 67 percent more fatal overdoses than it did during the same period the previous year. Over the first half of 2021, those numbers increased by another 22 percent compared to the same time in 2020.

“And unfortunately, hepatitis C has continued to increase dramatically and does track along with the growth of substance use disorders,” said Dr. Rebecca Dillingham, director of the Center for Global Health Equity at the University of Virginia. As more experts worry that the ongoing pandemic is fueling an already critical drug crisis, providers and advocates across Virginia are pushing to expand the treatment of the virus.

“I think we can say that the epidemic is not getting better and in fact we have a lot more work to do,” Dillingham said.

Health Brigade in Richmond is providing injection drug users clean needles and syringes in an attempt to stem the spread of HIV and hepatitis C. (Katie O’Connor/Virginia Mercury)

A shift in state coverage

For years, though, Virginia’s Medicaid program was more of a burden than a help to patients.

Neither the state’s Department of Health nor its Department of Medical Assistance Services (which administers Medicaid) has an estimate on how many hepatitis C patients in Virginia are covered through government-provided insurance. At least some studies, though, indicate it could be the majority. One paper by VDH and UVA researchers, including Dillingham, tracked 123 patients with active infections in Southwest Virginia and found that 63 percent were covered by Medicaid.

That was a problem when it came to coverage. The arrival of direct-acting antivirals was a groundbreaking development for hepatitis C patients, who previously relied on a cocktail of injections that only worked around 50 percent of the time. Dillingham said treatment typically lasted a year, and the drugs could cause serious side effects including flu-like symptoms, severe anemia and even psychiatric issues.

“So you’re going through this misery and your chances of being cured were maybe a little better than a coin flip,” she said. The success rate for current medications, on the other hand, is approximately 95 percent, and most treatment lasts between eight and 12 weeks with minimal side effects.

Ironically, most Medicaid patients couldn’t access it. Until 2017, Virginians covered under the program didn’t qualify for medication unless their liver was already damaged, nearly to the point of cirrhosis. Until 2018, only specialists in infectious diseases or gastroenterology could prescribe it — a major barrier for patients without local providers who couldn’t make the drive for care.

“I realized, even being in Charlottesville, that patients living as close as Harrisonburg couldn’t get an appointment just because they didn’t have the transportation,” said Terry Knick, a registered nurse who received her master’s degree in public health from UVA and now leads its hepatitis C education and patient connection program. It was particularly problematic given that rates of the virus are especially concentrated in rural Southwest Virginia, which has increasingly borne the brunt of the state’s opioid epidemic.

In some ways, the initial barriers made sense. Dr. Chethan Bachireddy, the chief medical officer for Virginia Medicaid, said the specialist restrictions were a holdover from earlier days of treating hepatitis C, when the only available drugs could cause serious complications. For years, direct-acting antivirals were also shockingly expensive for the state.

When the medications were first released, a single regimen cost approximately $84,000 per patient. That price has gone down significantly since Virginia entered a multistate bargaining compact, which Bachireddy said gave it more power to negotiate the price with manufacturers. It’s now below $24,000 per patient, though he said he’s prohibited from naming the exact cost.

Still, the medication has never been cheap, and Knick said the cost, combined with continued stigma over the condition, has at least indirectly contributed to many of the restrictions. Even after Virginia eliminated its fibrosis requirements (the amount of liver damage a patient had to sustain before becoming eligible for medication) and its provider restrictions, it took another year for the state to eliminate another big barrier — its [abstinence pledge] for patients.

“Really, this requirement said you could only receive treatment for hepatitis C if you’re abstaining from drugs and alcohol,” said Bachireddy, who joined the department in 2018. To Bachireddy, it was nonsensical given that Virginia Medicaid wasn’t covering addiction treatment at the time. For providers, it was especially personal as they treated patients working to overcome both substance use disorder and hepatitis C.

“The reality is that some people aren’t ready to stop using substances,” Dillingham said. “But that shouldn’t disqualify them from treatment for other diseases. We treat people who smoke for lung cancer. We treat people who eat dessert for diabetes. But we’re not going to treat people for a potentially life-threatening liver disease? That doesn’t make sense.”

Virginia wasn’t the only state with such strict requirements. As of 2021, Medicaid programs in 13 states still require a period of abstinence and another 15 require screening or substance use counseling, according to the most recent review by Harvard researchers and the National Viral Hepatitis Roundtable.

Four states still have fibrosis requirements, and 18 still have prescriber restrictions. Virginia’s Medicaid program, in fact, is now among the most progressive in the country when it comes to eliminating barriers for hepatitis C treatment.

Still, both providers and patients say there’s room for progress. As Virginia has loosened its restrictions, both Dillingham and Knick have focused on training more clinicians to prescribe the medication. Knick said many still aren’t aware there’s a cure for hepatitis C or that primary care providers can offer treatment.

Expanding access is crucial for reducing — and hopefully eliminating — hepatitis C from the community. The disease is also widespread among Virginians in prison, who are eligible for Medicaid after release and often struggle to access care. Adding local providers can also be vital to patients in rural areas without ready access to transportation. So far, UVA and VDH have provided training to 100 providers, including pharmacists and nurse practitioners, and linked more than 1,000 patients to treatment, according to Knick.

Lack of awareness remains a challenge, though, as does stigma. According to Lord Smith, some providers simply don’t screen for hepatitis C because they don’t think they’ll be able to offer their patients a place to go for treatment. Knick has compiled an online resource for patients showing local providers who prescribe medication for hepatitis C. But even though the state has eliminated barriers like abstinence requires, some clinics are still demanding them.

“There are still specialists requiring sobriety and it’s ridiculous,” she said. “There’s this attitude like, ‘They’re going to get reinfected. They’re not going to take their medicine. I don’t want to waste treatment on them.’ And there’s just no evidence that’s true.”