A little bit of home for the holidays 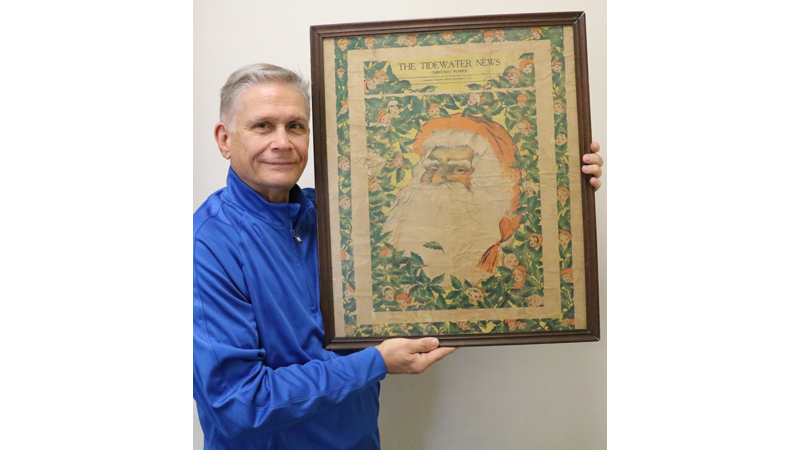 Franklin native Tony Surace holds up a framed, Christmas-themed front page of The Tidewater News from 1913 that he has hung above the fireplace in his home around the holidays for more than 40 years. (Photo by Titus Mohler)

Franklin native Tony Surace makes a point of decorating his home each holiday season to help set the scene for Christmas, and for decades now, included in his decorations has been a front page from The Tidewater News dating back to the early 1900s.

He noted that in the past, when people would build their houses, they would insulate the inside walls with newspaper and whatever else they could gather.

On a day in the early 1970s, Surace’s brother, Dickie Surace, was helping demolish a house somewhere in Franklin when he discovered a colorful front page from The Tidewater News dedicated entirely to a Christmas-themed artistic work that prominently featured Santa Claus.

“(Dickie) doesn’t even remember the house that it was at, but he saw it when they pulled the wall down,” Tony said. “He says, ‘I’ve got to have that.’ So he cut it out.”

In short order, he gave it to Tony, who framed it himself soon thereafter.

Tony highlighted some of the details of the front page, noting it was from the Friday, Dec. 12, 1913, edition of the paper.

“That’s pretty old,” he said. “This one has got damage on it in different places, but it’s held together.”

He pointed out a faint label on the paper near the top of it that seemed to indicate who had owned it.

He noted that the color on the page has held up quite well.

Tony and his wife of 52 years, Joani, live in Chesapeake but grew up, went to school and married in Franklin.

Incorporating the now-108-year-old front page from The Tidewater News into their Christmas decor serves as a fitting reminder to the Suraces of their own history and also that of the city from whence they came.

“We’ve been putting that picture up over the fireplace for over 40 years,” Tony said.