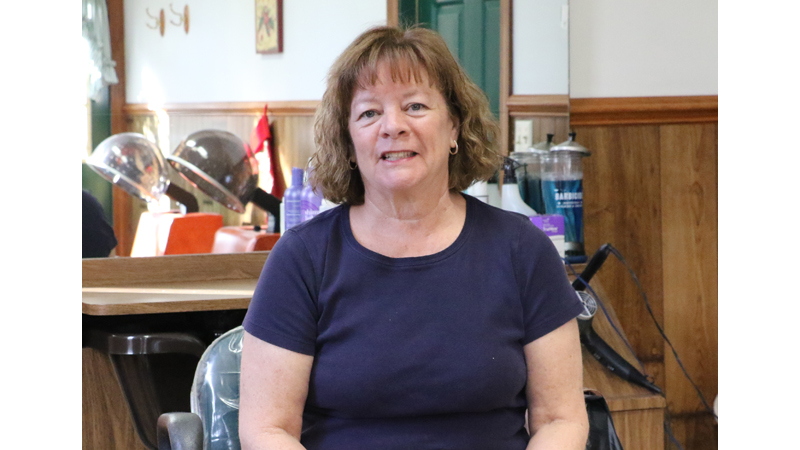 Melanie Beale smiles for a photo in her business, Melanie’s Country Curl Beauty Salon, that has existed in Windsor since September 1983. She will be retiring and closing the salon Dec. 23. (Photo by Titus Mohler)

For more than 38 years, Melanie’s Country Curl Beauty Salon has afforded its owner, Melanie Beale, the opportunity to do what she enjoys.

She provides haircuts, perms and colors out of a shop in her home in Windsor while still having the flexibility to take care of her family, which was particularly key when her two children were still at home near the beginning of the beauty salon’s run.

But on Dec. 23, Beale will be retiring and closing the salon.

“This has been the greatest — to get to do what you like to do and do it from home,” she said.

The inspiration that led to Melanie’s Country Curl was first on display when Beale, a Carrsville native, was in elementary school.

“When I was in the fourth grade, I wanted to be a hairdresser,” she said. “I had a neighbor, she was a senior in high school, had hair down to here, and I’d go next door just to brush her hair.”

Beale said that being a hairdresser is “just what I wanted to do forever, didn’t want to do anything else.”

A graduate of Windsor High School, Beale said her part of her class’s high school prophecy was largely accurate.

“In the prophecy, I owned my own beauty salon, and it was called, ‘The Tease,’” she said. “That’s how somebody wrote it up. I thought, ‘Well, we ended up with the beauty shop, but it wasn’t called ‘The Tease.’”

She noted that she went to beauty school during her last year of high school.

She opened Melanie’s Country Curl Beauty Salon in September 1983, operating out of another house in town.

Beale had a babysitter helping to look after her son and daughter when she was at work in the first few years of the business, including a few years before that when she worked for another hairdresser.

Then Beale and her husband purchased a lot on Twin Circle in Windsor and built their current house.

“Instead of having a two-car garage, I made half of it into my beauty shop,” she said.

The house was completed in 1986, and that is when Melanie’s Country Curl moved there — its longstanding, final location.

Beale has always been the business’s only hairdresser. She operates by appointment only, and for the majority of her beauty salon’s run, she has taken appointments on Tuesdays, Thursdays and Fridays.

She noted that from 1983 until now, she has always been as busy as she wanted to be. In the early years, she was serving clients amid a schedule that included her children’s participation in sports, cheerleading, dance and more.

“It’s been the best career I think anybody could have that wanted a family too, because when having children, I’ve been at home, so the bus comes, (the kids) get off, Momma’s always home,” she said.

When time allowed for more clients, more of them came.

She said she never advertised her business in any newspaper, but rather, it was sustained by good word-of-mouth.

“That’s the best kind of advertisement there is,” she said.

Her clients have come from all over the Hampton Roads area, and in some instances, she has served multiple generations of families.

She said what she will miss most about running the business is seeing the people.

She does not have any immediate retirement plans, but she said her daughter wants to take her on some trips, and now she will have more flexibility to visit different places, since she will not have the need to get back to town and the shop.

As for why December 2021 was the right time to retire, she pointed to some wear and tear on her knee and arm.

“I think that was it, and then another thing was a perm that I’ve been giving for over 40 years is no longer available,” she said. “I thought, ‘Well, Lord, that must be my other sign.’ I can’t get it anymore, they’re not making it anymore, (and) I thought, ‘Well, it’s time to stop then.’”

Some of her longtime clients have been making the effort to come out for a final appointment this month, honoring the 38 years of service to the community by Melanie’s Country Curl Beauty Salon.

As she finished sharing the salon’s history, Beale said, “That’s the story of a little girl getting to do what she likes.”