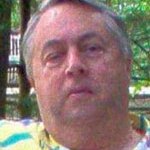 John was a graduate of Windsor High School and a retired operator in the pulp mill department at International Paper. He taught defensive driving classes for the Commonwealth of Virginia and a former member of the Franklin Rescue Squad. He was an active member of Burdette Baptist Church and was a member of the local Gideon Camp.

A funeral service for John and his daughter, Angelia who died Nov. 6, 2021, will be held Thursday, Dec. 23, at 2 p.m. in Wright Funeral Home with the Rev. Joe Poe and the Rev. James H. Hyatt Jr. officiating. The burial will follow at Southampton Memorial Park. The family will receive friends one hour prior to the service and suggests that memorial donations be made to Burdette Baptist Church or Franklin Fire and Rescue.