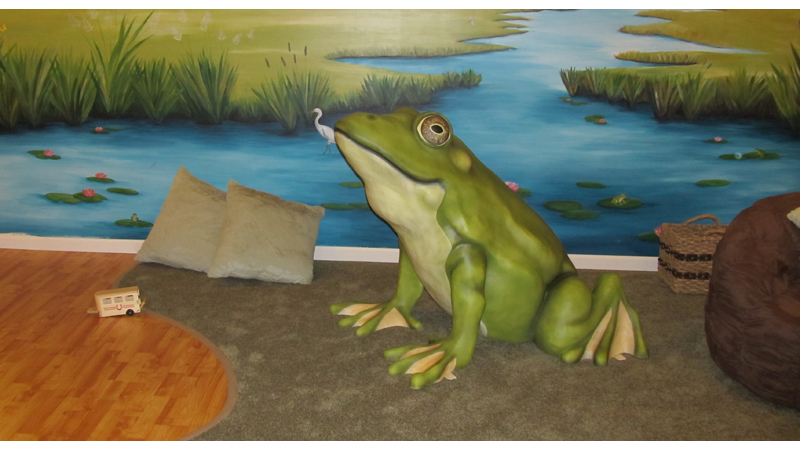 The Windsor Economic Development Authority has purchased three of these frogs that are fabricated in hand lay up fiberglass. Pictured is a painted and installed example of the leaping frog sculptures that will each have different color schemes and be placed at key spots in Windsor in 2022, possibly being moved from one location to another at later dates. (Photo submitted by Cowpainters)

The Windsor Town Council provided guidance Nov. 9 for the Economic Development Authority on the next steps it should take with regard to the placement of three large frog sculptures it ordered that will be painted and placed at key points in Windsor by around spring 2022.

Councilman Jake Redd, who sits on the EDA, previously explained the purpose of the frogs when he said that the EDA had been looking for a way to aid the town not just through business retention and recruitment but also by creating something for people to recognize the town by. “Frog” having been part of a town nickname in the past made frogs an obvious choice.

The EDA has allocated $5,000 for the project, and each frog costs $1,171 plus shipping costs. Windsor Treasurer Cheryl McClanahan confirmed a check was sent to the frog manufacturer the week of Nov. 9, and Redd said at least the first frog should arrive 19-20 weeks after payment was sent.

Redd previously noted that each frog is 42 inches high, 42 inches wide, has 45 inches of depth and weighs about 250 pounds. The chosen design for Windsor shows a frog in a sitting position but about to leap. Brieanne Hauger, of Cowpainters, the company making the frogs, said this design is fabricated in hand lay up fiberglass.

Each frog will feature a different color scheme.

The EDA has asked Town Manager William Saunders “to put it out on Facebook to look for some art submissions for the town frogs,” Redd said Nov. 9, “and the EDA wants Town Council’s input on the location of the three frogs. We’ve got a few ideas right now, which is the Wesley (F.) Garris Event Park; down at the corner of Shirley Drive and (U.S.) 460 on town property; the Windsor Town Center; and close to where the water tower is on (Route) 258, the sign there.”

“At this point, no one showed up to the last meeting as far as from the public to talk about ideas about where they want it put and that sort of thing or any ideas on location,” he added. “This was just the EDA throwing around these ideas.”

He said that hopefully Town Council will give the final approval on where these frogs will go.

Mayor Glyn T. Willis said, “I assume they’re durable enough that if they were over here in the Wesley Garris Park that children and so forth isn’t going to be an issue with them being climbed on.”

“That’s what I’ve been told,” Redd said, though he added he did not know for sure.

Councilman George Stubbs asked if any consideration had been given to putting one of the frogs at the town entrance sign on U.S. Route 460.

“Yeah, we talked about basically all the town signs, where the Windsor signs are, that those would be good locations,” Redd said.

Councilman J. Randy Carr asked if it was going to take a bucket truck or a special piece of equipment to move the frogs when they are placed, and Redd cited the weight of the frogs.

Carr then suggested a frog could be placed at an agreed-upon location but that this location did not have to be its permanent home.

Stubbs mentioned that the frogs would need bases to sit on because if they sit on soil, eventually they would sink.

Carr did not see the added detail of a base as being a barrier to moving them from time to time.

It was suggested that a polymer base could be used for the frogs.

Suggesting another location for the frogs, Councilwoman Kelly Blankenship said, “I was wondering if there was any consideration (given) to the property where the police department is. There’s a big plot of land there with the thought that there’ll be some future building there. And technically it’s kind of in the center. It’ll get a lot of visibility, whereas at the park, you’re not going to get a lot of visibility there, if that’s what you’re looking for.”

Mayor Willis said, “Well, you’ll get a different type of visibility because those that do go to the park and particularly the town center, the people that are going to Town Center will see it.”

Carr suggested the frogs start out at three primary town places, like the Windsor Town Center, Town Hall and the sign coming into town.

The mayor then said, “Let me suggest — based off of some comments here tonight — finding out what’s their mobility, and then identify half a dozen places, and we can make a determination of, ‘OK, here’s where those start out,’ we’ll see what kind of feedback we get on them and then maybe move them to attract attention.”

Redd agreed that he had some good direction to take back to the EDA.