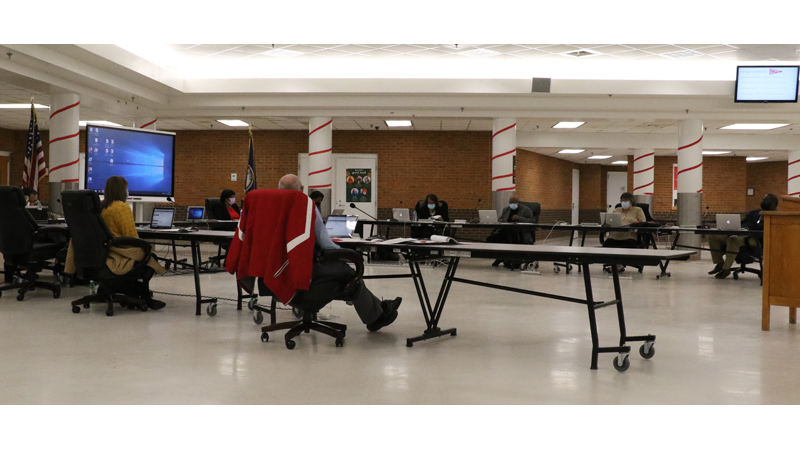 The Southampton County School Board voted 8-0 on Dec. 13 to pass a motion declining an invitation from the Southampton County Board of Supervisors to attend the supervisors’ Dec. 14 meeting where they wanted the school board to offer thoughts and observations on a “parental rights” resolution that could impact funding of the county’s public schools.

The motion also included a proposal from the school board that the Board of Supervisors instead join it for a joint work session on a future date to engage in an informed, facilitated discussion regarding conflicts, real or perceived, between the commonwealth’s cultural competency training and parental rights.

At the Nov. 23 Board of Supervisors meeting, Jerusalem District Supervisor and Board Chairman Dr. Alan W. Edwards led a discussion about a resolution the York County Board of Supervisors was considering that would threaten to withhold local funding for schools if the local school division failed to adhere to Section 1-240.1 of the Code of Virginia in teaching ideologies based upon the state’s cultural competency training.

The school board had a copy Monday of the draft Southampton County resolution, which is available at SouthamptonCounty.org, and School Board Chair Dr. Deborah Goodwyn read it aloud.

The first paragraph of the resolution states that “the Southampton County Board of Supervisors respectfully submits that §1-240.1 of the 1950 Code of Virginia, as amended, entitled the ‘Rights of Parents,’ emphatically states, ‘A parent has a fundamental right to make decisions concerning the upbringing, education and care of the parent’s child’…”

Addressing the rest of the school board Dec. 13, Goodwyn said this resolution is what the Board of Supervisors planned to vote on Dec. 14.

“My thinking is that according to our board policy, the Southampton County Public School Board accepts the overall goals of public education as expressed by the Standards of Quality legislated by the Virginia General Assembly and implemented by the standards of education regulations,” she said. “So we are following what the state has mandated, so we’re not creating anything outside of what the Virginia Department of Education says is its policies, procedures (and) regulations.

“My other comment is that a business meeting is not the best place for a discussion,” she added. “So I recommend that we respectfully decline the county Board of Supervisors’ invitation to give thoughts and observations regarding the Board of Supervisors’ resolution related to parental rights. Instead, I suggest that we propose that the school board and the Board of Supervisors hold a joint work session, and at this work session, we can engage in an informed and facilitated discussion regarding conflicts, real or perceived, between the commonwealth’s cultural competency training and parental rights.”

Board member Lynn Bradley was the first to express agreement with Goodwyn.

Referencing the draft resolution, she said, “I don’t think that’s something that needs to be voted on without both boards sitting down and discussing the policies on both sides.”

Goodwyn said, “Thoughts and observations would be personal opinions, and to take a board action means it has to be a collective action of the board. We can’t act as individuals; we operate as a board.”

She said the board’s position is that Southampton County Public Schools adhere to the policies as presented by the commonwealth of Virginia and as stated in the Standards of Quality.

Both Goodwyn and Bradley advocated for bringing in a facilitator at a joint work session to aid in having an informed discussion.

Goodwyn highlighted another portion of the draft resolution.

“If you look at their fourth paragraph, they say that the Board of Supervisors ‘is very much aware of the concerns of parents, students and taxpayers that the administration of the Southampton County Public Schools has ignored the fundamental rights of parents to make decisions concerning the upbringing, education and care of their children.’

“Well, where’s the proof?” she asked.

She later added, “I think that in a work session, we can get at what their concerns are,” noting that the resolution is full of things she does not know how the Board of Supervisors can substantiate.

Board member Denise Bunn said she had a problem with the divisive nature of the resolution and agreed with Goodwyn’s proposals.

“I think what we need at this point in time is we need good communication and mutual respect between these boards, and we’re not going to get that in a public meeting that they’re just asking for input,” Bunn said. “We need to sit down and rebuild this relationship. We’re not doing any favors for Southampton County with pieces of paper like this (resolution) being drafted and then maneuvers like this happening.”

Board member Christopher Smith Sr. pointed out that both boards are constitutionally mandated.

“We have our mandates from the constitution of the state of Virginia, and so do they,” he said. “Now, I would love to see a resolution that speaks to bringing in some business and industry, which is part of their task, creating jobs so that some of our students, as they leave high school, they don’t have to leave Southampton County to find gainful employment. We need business and industry. That’s their task and not ours.

“Now our part of that is to have a well-functioning school system that they can use as an instrument to recruit business and industry,” he continued. “Southampton County Public Schools is second-to-none in the state of Virginia. We do a wonderful job of creating an atmosphere for learning and intellectual development for our students, and we should continue to do that.”

In summation he said, “The point (is) that they want to berate us as a board, and they’re not doing their job.”

Bunn highlighted how the school system has a setup to train workers for any industry that the Board of Supervisors could recruit jobs for.

“We have a situation where right here on our high school campus, we can say, ‘Oh, you need a program that trains for warehousing? Sure, we can take care of that,’” she said. “If they will come and they will sit down at the table and work with us, we can help them. We are their best partner for recruiting industry, which is their function.”

“That’s what they have forgotten,” Board member Florence Reynolds said. “They have focused in on the schools and have forgotten the reason that they have been elected. I think it’s time for us to let them know what they’re supposed to be doing, and that way, they will see that if the two of us would work together, their board and our board, maybe we can get some industry in here. Maybe we could get a lower tax bracket in here. The citizens are not going to be able to pay taxes after a while, and (the Board of Supervisors is) not doing anything to bring in any taxpayers.”

Bunn said, “Do you think that we’re helping to bring industry here when they go and they Google ‘Southampton County’ and what they see is this (resolution)?”

Board member William Worsham questioned whether there was enough time to even begin doing what the Board of Supervisors requested given that its meeting was the next evening.

“Let’s don’t bring the school board to the Board of Supervisors so we can be scathed for things that, presumably, we’re not doing,” he said. “I have a problem with that. If they want to tell me in a work session that I’m not doing my job, that’s fine, but don’t take me to the public to do that.”

He said cutting school funding would hurt students, not the school board, and he shared his concern about how all the school system has to do is disobey one of the items listed in the resolution and its funding gets cut.

“The Board of Supervisors already has the means of directing funds to us,” he said. “They can either accept our budget as it is, they can level fund us, or, and this has never happened, but they can increase it. … Every dollar bill we get from them goes to students in some way, and if they cut those funds, it’s not going to hurt us around this table as much as it is children.”

School Board Vice Chair James Pope III said he agreed with the proposal for a joint work session and suggested having the Board of Supervisors present Superintendent Dr. Gwendolyn P. Shannon with a list of concerns or questions it has ahead of time so the school board would be prepared.

“I don’t think it’s fair to walk in there cold,” he said.

Goodwyn said the work session would need to be a discussion rather than a question-and-answer exchange.

“If we sit down in a work session, then we can talk about what the law says, what the literature says and what Southampton County Public Schools is really doing,” she said.

Board member Greg Scott said, “I think the work session would be great so we can all understand our roles. You let the referees referee a game, you don’t let the people in the stands call the game.”

Bradley expressed a desire for a better relationship between the two boards that does not involve constant picking at each other.

“We can be the best allies in the world, and we can all sit down together to make Southampton County a whole lot better, but it’s going to take both boards to sit down and mutually do this together and not constantly pick,” she said.

More snow on the way

Board to discuss ‘parental rights’ resolution