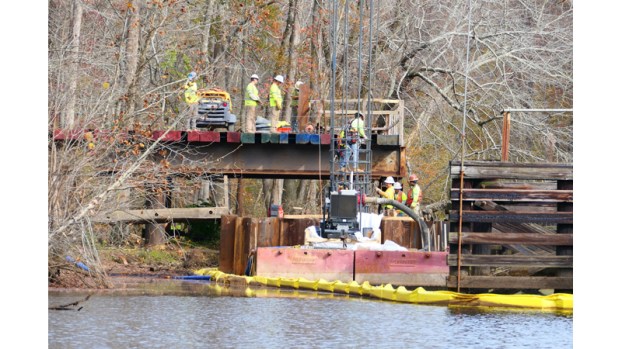 Blackwater Nottoway RiverGuard Jeff Turner reported that work on the Route 189 bridge continues and is quite interesting to watch from the Blackwater River. (Photo submitted by Jeff Turner) 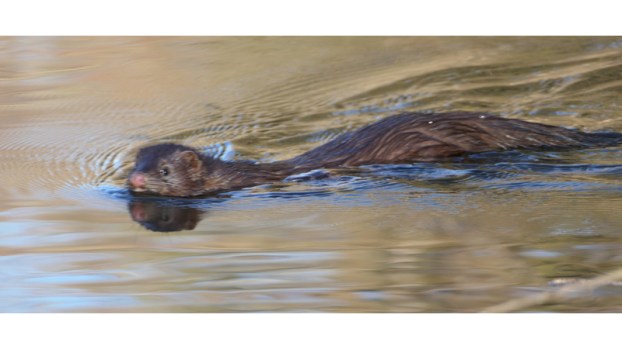 On his latest patrol of the Blackwater River below Franklin, Blackwater Nottoway RiverGuard Jeff Turner spotted this mink, which he said “you do not see too many of.” (Photo submitted by Jeff Turner)

Spirit of Moonpie and I spent December the 1st through the 3rd on the Blackwater below Franklin. The water was low, no flow, nasty, leafy and 49 degrees. Air temps ranged from 42 to 70 degrees, pretty darn nice for December.

I picked up more trash this time, but it still was only about a third of a bag. I saw no other water quality issues than what I have mentioned.

The fishing on this trip was tough. I caught a few chain pickerel, one was 3 pounds, and a nice 3-pound bass, but I did a lot of casting to catch those few fish. I caught a couple raccoon perch while casting, so I tried jigging for them for a short time but had no luck. I don’t know if they will have a big spawn or not this year with no flow in the river. We really need water and lots of it. The leaves are so thick in some places a lure will not even sink. Because there is no flow, the leaves are just building up instead of naturally working their way downriver. When traveling I had to stop the boat many times to clear leaves from the prop. I hate when that happens as it makes the motor cavitate and jump sideways, scares the heck out of me.

Work on the Route 189 bridge continues and is quite interesting to watch from the water. I caution boaters going through there to be aware, though, of floating lumber. I found several large pieces of lumber in the vicinity of the bridge in the river. I am not saying it’s coming from the work on the bridge, just letting you know that’s where it is. I contacted the company that is doing the job, and they said they would look into it.

So yep, the alligator weed is loving these mild temps. It is really spreading in the Blackwater like I have never seen before. Usually it has receded by now, but these mild temps are just what it needs to continue its conquest of the river. It is my belief that this trend will continue in the coming years. However, I’ll probably be dead and gone before it ever takes over the river. It’s something I hope I never see out here on the two rivers we call the Blackwater and Nottoway.