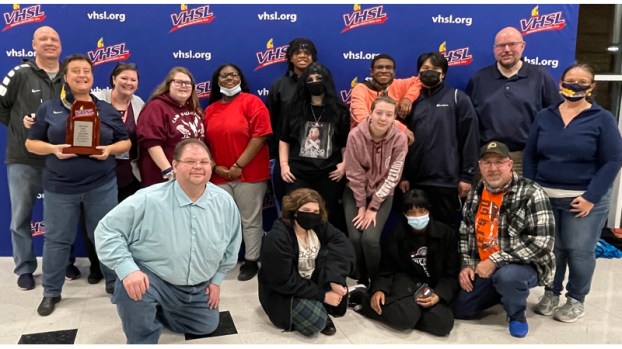 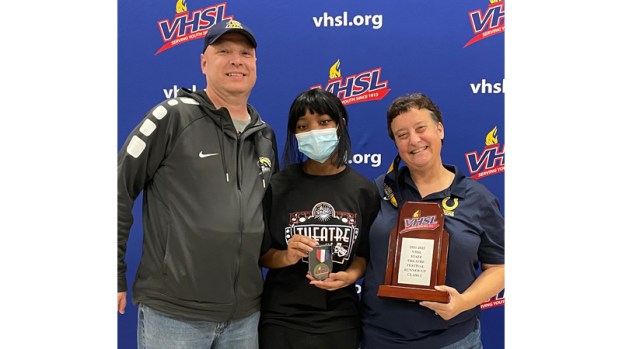 Serenity Everette, center, presents the medal she earned for being one of only four students at the VHSL Class 1 state level to receive the Outstanding Actor honor. On her left is Franklin High School Principal Travis Felts, and on her right is FHS Theatre Coach Teri Zurfluh, holding the Franklin theatre troupe’s state runner-up trophy that Everette helped it earn. (Photo submitted by Travis Felts)

The 2021 Franklin High School theatre troupe placed second over the weekend at the Virginia High School League Class 1 State Theatre Festival, which is the best finish in the history of the school’s program.

She said Franklin had not competed for a couple years, in part due to COVID-19.

FHS Principal Travis Felts said, “The entire FHS family is extremely proud of these students for all of their hard work and accolades on the sectional, regional and state levels. They rehearsed every day of the week and late into the evening, perfecting their performance, and it paid off.

“I have never seen a team more dedicated and committed to achieving a goal,” he continued. “They have a great leader in Mrs. Zurfluh. She gives up a lot of her personal time to make sure these talented students are prepared for every performance and competition.”

He said FHS staff members have confirmed the last time the school’s theatre troupe made it to the state level was in the 1990s under the direction of Ken Raybuck.

As for the 2021 troupe’s state runner-up status, Felts said, “This is the highest we have ever finished.”

Serenity Everette, a member of Franklin’s troupe, was one of only four students at the VHSL Class 1 state level to receive the Outstanding Actor award.

Already a talented singer, she said receiving the acting honor felt like a new start.

“Not only have I been progressing in my music but also starting to progress and bloom as an actor,” she said. “The performing arts have always been my dream. So I’ve been working hard, and to finally see my work starting to pay off and form into something so new and beautiful was an amazing feeling.”

Prior to states, she received the Outstanding Actor award at the super regional level, and before that, she received honorable mention at sectionals.

Reacting to her team’s high finish at states, Everett said the announcement gave her a heartwarming feeling.

“To win something together with some of the people you care about most was one of the best treasures to me,” she said. “I love everyone on my team, and I’m especially thankful for my coach, Mrs. Z, who has helped me learn to express myself in a way I’ve always dreamed to!”

Franklin High School’s theatre department recently benefited from some significant upgrades in equipment and materials, and the school was asked to host the sectional and super regional events that led up to states.

At each level, the FHS theatre troupe performed “The New Margo,” which Zurfluh described as a very contemporary piece about five college friends who have just gone to college in their freshman year, and something happens.

She said there are about 27 twists and turns in the story, and “you don’t know where it’s going until the very end.”

The festivals require a performance no longer than 35 minutes, and “The New Margo” is a one-act play that is just less than 35 minutes in runtime. It features a cast of five characters, all women, and Zurfluh said Franklin’s production also ultimately featured a crew of four.

“The cast doubled as crew because we’re just that small, but it was wonderful, and we had new people join us along the way, which was exciting,” she said. “We had a student see us at the first competition, and said, ‘Well, I want to be part of this,’ and so then he became part of this and went to states with us as part of the crew.”

The FHS troupe was the runner-up at the sectional, super regional and state levels after standing out at every level.

“The ironic part is that this was my rebuilding year,” Zurfluh said. “I graduated eight seniors last year.”

She noted that there are four judges at the festivals, and she outlined the general categories upon which they are focusing their judgments: acting, direction and ensemble.

She said acting pertains to the actual actors’ performances.

Direction addresses how she and the troupe took the show from the script to the stage.

“So that’s a little bit more of an evaluation of me and then how they executed that,” she said.

She noted the ensemble category answers these key questions about the actors: “How well did they work together? Was it believable? Did it feel like it was the very first time they had said those words?”

“What we did is we took advantage of the judges’ comments — positive and developmental — and worked on those where we kept the things they liked, we looked at the things they said that they didn’t like and we decided whether we thought that was valid or not, and we made improvements,” she said. “So we tweaked it all along the way to the point where they were really at the top of their game, they really peaked when we got to states and we really had benefited from comments from all the judges along with the competition.”

After enjoying a “home field” advantage in sectionals and super regionals, the FHS troupe had to go to Monticello High School in Charlottesville on Saturday, Dec. 4, for the state festival and perform on a stage it had never seen before.

She noted judges are not evaluating troupes on their technology or even their sets, and the teams are encouraged to keep those aspects of their productions simple.

“So the kids worked really hard,” Zurfluh said. “They were really excited. We just kind of took the approach that states was the great experience, but we knew we would be competing against the best of the best in our class.”

Reflecting on her 2021 Franklin troupe, Zurfluh said, “I really believed in these kids, in their hearts. They’ve worked really, really hard.”

For those interested in seeing firsthand how the Franklin theatre troupe made history, it will deliver a one-night-only performance of “The New Margo” on Saturday, Dec. 11, at 7 p.m. at Franklin High School. Tickets are $7 per person and available at the door Saturday evening. Doors open at 6:30 p.m.