COURTLAND – Jackie Dean Vick, 70, passed away Dec. 2, in his home with his family by his side. Born in Franklin and raised in Newsoms, he was a son of the late Calvin Bland “Jack” Vick and Annie Maude Ferguson “Sally” Vick. He was also predeceased by a son, Jason Dean Vick and aunt, Carolyn Vick. 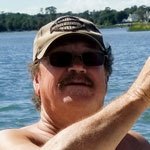 Jackie was a 1969 graduate of Southampton High School and a six year Virginia National Guardsman and also serving in the Army Reserves. He was a former maintenance supervisor for Southampton County. Jackie was a member of S&S Hunt Club and Newsoms United Methodist Church.

Left to cherish his memory is his wife of 42 years, Vanessa Coggsdale Vick; a son, John Wesley Vick and his wife, Stephanie; two sisters, Brenda Vick Darden and Wendy Vick Joyner and her husband, Doug; two brothers, Dennis C. Vick and his wife, Betsy and Timmy Vick and his wife, Rhonda; a granddaughter, Atley Dean Vick; his father and mother-in-law, J.W. and Shelby Coggsdale; a special uncle, Melvin Vick; and a host of nieces and nephews; and his two canine companions, Buddy and Harley.

A graveside service with military honors will be held at 11 a.m. on Monday, Dec. 6 in Hollywood Cemetery with Pastor Michael Baugham officiating. The family will receive friends at the residence and suggests that memorial donations be made to the American Cancer Society or S&S Hunt Club, c/o Chris Drake, 31302 Statesville Road, Newsoms, VA 23874.