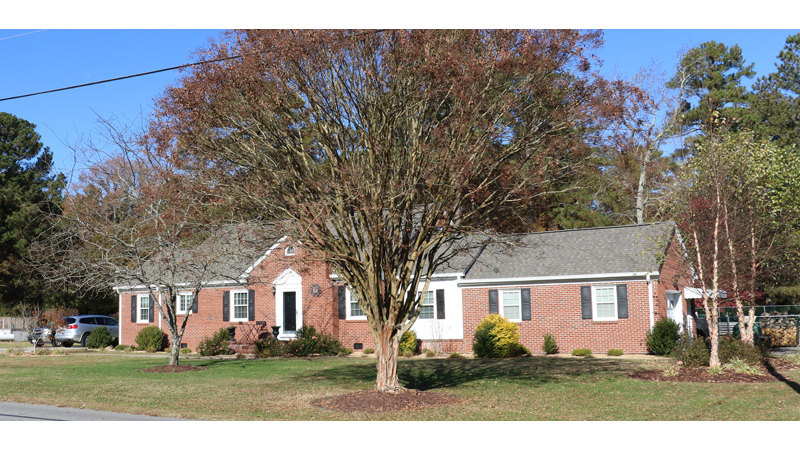 The owners of this house located on the northwest corner of Johnson Avenue and Shiloh Drive in Windsor beautified the property and helped inspire the start of the Windsor Residential Beautification Project. The town is seeking incorporated town residents to serve on the project’s committee. (Photo by Titus Mohler)

The Windsor Town Council voted unanimously at its November meeting to establish the Windsor Residential Beautification Committee, adding that the first task will be organizing the committee itself.

The four-member committee will include Councilman Walter Bernacki, who will be a non-voting member serving as a liaison between the committee and the Town Council.

The other three members must be incorporated town residents, and the town is now looking for applicants for these roles.

Explaining how the terms of the committee members work, Windsor Town Manager William Saunders said, “There will be three members that have staggered terms to start, so the first person appointed has a one-year term, then a two, then a three so that they rotate. But with only three members, that means you’re looking for a reappointment or an appointment every year.”

Bernacki explained how the Windsor Residential Beautification Project got started.

He said he inquired about the project when he was approached by three different residents of the community that had noticed a man and his wife had purchased a house and fixed it up and then did some beautification of the landscaping on the northwest corner of Johnson Avenue and Shiloh Drive in Windsor.

The residents wanted to know if they could nominate the man and his wife for any type of award, having seen a beautification award sign in front of the hardware store.

So Bernacki started inquiring, and he learned from Durwood Scott, of the Windsor Economic Development Authority, that the sign in front of the hardware store was part of a project that had been started many years ago to get businesses to beautify.

“It’s an awesome opportunity that we can recognize people,” he said.

He explained that when someone is recognized for making their yard look particularly nice, often the neighbors will put in more work on their respective lawns.

“It would hopefully be a domino effect where people would just start sprucing their yards up and making the community just that much nicer,” he said.

The beautification project was handed to Bernacki, and he was asked to do some research on it.

He said he consulted several communities similar in size to Windsor that had beautification programs, finding out what was and was not working for them, and gleaning some good insights.

Some of the bigger cities that Bernacki researched hand out beautification awards on a quarterly basis.

“The size of our town, I feel, once or twice a year would be sufficient, but that’s just my opinion,” he said, noting the committee, when formed, could choose to be more aggressive than that or choose to adjust that frequency as the town grows.

He indicated that the committee would also feel out how often it should meet.

“Right now, it’s a minimum of at least once a year,” he said.

As council liaison, Bernacki said he would sit down with the rest of the committee and give it direction, offer suggestions and encourage it to come up with a nomination criteria.

“I want to try to give them some autonomy to figure that out, because the diversity of the community will definitely give us some better ideas for that,” he said. “And then once they do that, then we can start awarding, and as more people see the program moving forward and (actually) started, then hopefully it will snowball, and maybe they’ll end up doing it a couple times a year.”

With regard to award procedure, Bernacki said that most of the other communities he researched gave the winner a sign to put on their front lawn until it was awarded to another recipient later in the year.

He said a couple communities got creative and boosted incentive by partnering with a local business to offer gift cards to winners.

“But initially a sign would be in your front yard, and you could make the sign up,” he said to council members. “The sign wasn’t real expensive to make up. Generally, depending on the size you want, it was under $30. So that wouldn’t be a huge cost there. And that sign would be the one that would be carried until it, obviously, wore out, or if it was destroyed, it would have to be replaced.”

The Windsor Town Council is asking for any incorporated town resident that would be interested in serving on the committee to contact the Town Hall during regular business hours. Contact is possible by phone by calling 757-242-4288; by the town website — www.windsor-va.gov — by filling out the “Contact us Online” form; or by coming to the Town Hall in person at 8 E. Windsor Blvd.

Bernacki asked that those interested in serving on the committee submit their names by Dec. 31.

“That way we can bring it up at the first council meeting in January and then move forward from there,” he said.