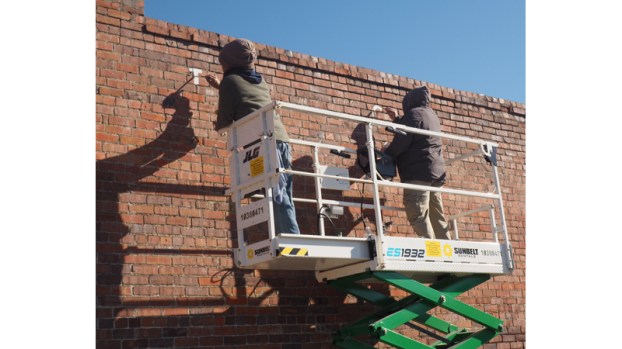 The Woman’s Club of Windsor has retained muralist Sam Welty to help restore original graphics and make new ones on the side of an early 1900s brick building in the town. (Photo by Stephen Faleski) 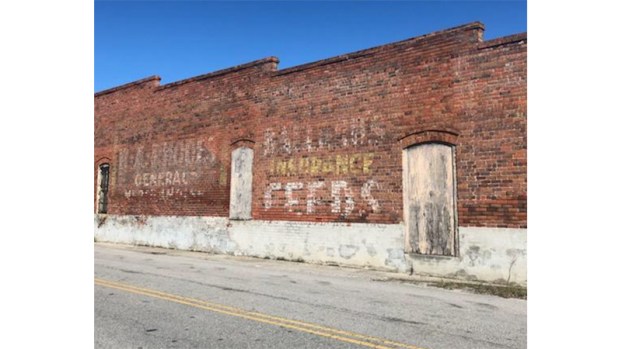 The Woman’s Club of Windsor has retained muralist Sam Welty to help restore original graphics and make new ones on the side of an early 1900s brick building in the town. (Photo by Stephen Faleski)

In Windsor near where South Court Street meets the railroad tracks stands a one-story brick storefront that dates to the early 1900s.

It’s one of the few examples of commercial architecture still standing from the era of the town’s 1902 founding. The building has seen many uses over the decades, as evident by faded signage painted on the bricks — signage the Woman’s Club of Windsor now hopes to restore.

In a Nov. 1 press release, the club announced it has retained muralist Sam Welty for the project. Welty previously created the design for the six-panel mural members of Girl Scout Troop 1105 painted on a building at the corner of Windsor Boulevard and Joyner Avenue in 2015, which depicts other historic buildings that once stood in town.

Welty has been painting murals for over a decade, many with the help of Shah Moten, a fellow artist and photographer.

“I just saw a really big wall and wanted to paint something on it,” Welty said as to how he got started.

His latest work in Windsor, which he began Nov. 15, will also be a multi-paneled mural, this one depicting the various tenants to have occupied the storefront. One panel will represent Ballard and Ballard, a chicken feed company. Another will show R.A. Rhodes General Merchandise, a store that existed in the early 1900s and served as a meeting site for Windsor’s Town Council before a town office was built. A third panel will depict Ballard’s Insurance and Feed. The fourth will be left blank for now, but the club plans for it to eventually include a LOVE sign and frog.

According to the town’s website, Native Americans originally named the area “Corrowaugh.” Early residents then named the area “Frog Level” for the many small frogs indigenous to the wet, heavy soil. Eventually, a train depot known as Windsor Station was built, resulting in the town’s current name.

The club plans to coordinate the project with the Windsor Economic Development Authority’s landmark frog project, which will involve placing three large frog sculptures throughout the town.

“The frogs will be painted by various artists in the area and we hope to see them around town in the near future,” said Mary Lee Willis, co-chairwoman of the club’s civic engagement and outreach committee.

In addition to a LOVE sign and a frog, the club plans to include the names of any sponsors who donate $1,000 or more toward the project on the fourth panel. The club hopes to raise $10,000 and have the project complete by Christmas.

“We’re also hoping to print a booklet that will be available to any interested individuals that is a sketch of the town history,” Willis said. “It is a compilation of several partial histories written through the years.”

The building is part of Windsor Hardware & Supply Company. Owner Tammy Edwards currently uses the detached building as storage for the hardware store’s garden center but said she has plans to expand store operations into the building.

The club’s press release advises those wishing to contribute funding for the mural to email wcwindsorva@gmail.com.